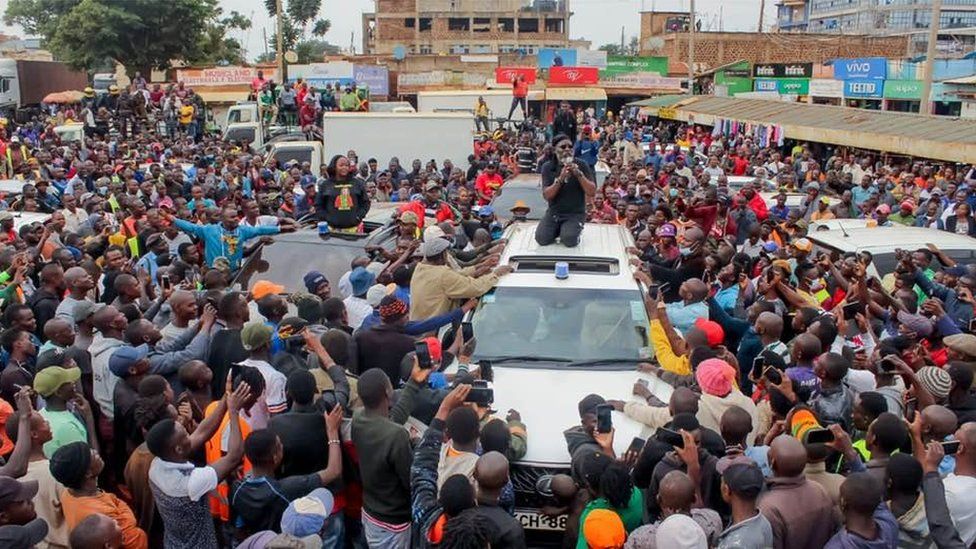 NAIROBI: Once a street child in Kenya and a grave digger in the UK, George Wajackoyah has become a political sensation by running for Kenya’s presidency on a promise to turn the East African nation into a major exporter of marijuana, snake venom and hyenas’ testicles, although many question the feasibility of his plans.

The 63-year-old professor, who has a background in law, has proved to be the most eccentric of the four presidential candidates contesting the 9 August election.

Polls have ranked the Roots Party candidate a poor third – the latest one, released on 11 July, gives him just 4% of the vote.

But pundits say that for a first-time contestant he is doing well and the two front-runners will be worried about shedding even a single vote to him as the poll predicts a tight contest, putting veteran opposition leader Raila Odinga on 43% and Deputy President William Ruto on 39%.

“Wajackoyah is running on an outrageous platform that would ordinarily be laughed out of town, but there is no doubt that he has captured the imagination of angry, disaffected youth in both urban and rural Kenya, cutting across all the regular ethnic, regional and party lines,” writes Macharia Gaitho, a leading columnist with Kenya’s Daily Nation newspaper.

On the campaign trail, Prof Wajackoyah tends to wear a tracksuit, T-shirt and headscarf rather than a smart suit – to show he is not part of the Kenyan establishment he accuses of rampant corruption.

He also often gestures with his fingers as if he is smoking marijuana and drives crowds into a frenzy as he dances to reggae songs. 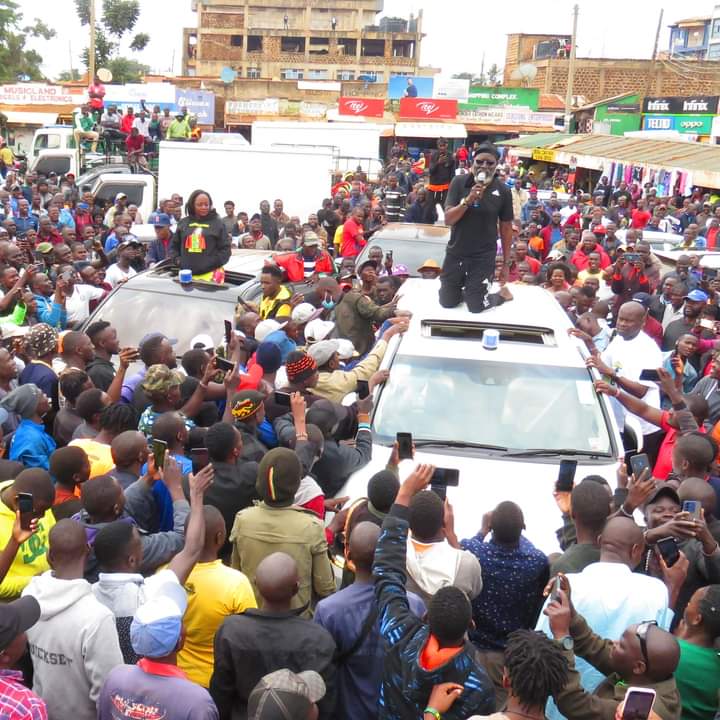 Prof Wajackoyah says if he wins he will pass laws to regulate the farming and production of marijuana for industrial and medical use, to help solve two of Kenya’s biggest problems – unemployment and a ballooning national debt.

He claims it could earn Kenya more than nine trillion shillings ($76bn; £64bn) annually, and the government would “never have to borrow a single coin” again.

“Western countries have legalised bhang [marijuana]; why shouldn’t we?” he adds.

Though he has not backed up his claims with detailed research, the legalisation of marijuana for industrial and medicinal use is the central pledge of his campaign.

The Africa Check website has described his plans as misleading.

Nevertheless, it has made him a talking point on social media, and has excited many youth, who are badly affected by unemployment.

If Prof Wajackoyah’s proposal is implemented, it will see Kenya join other African countries – including Lesotho, South Africa, Zambia and Zimbabwe – that are seeking to tap into the global marijuana market, which, according to some estimates, is expected to be worth around $70bn by 2028.

Prof Wajackoyah says he has never smoked marijuana, but would be the first person to do so in celebration if Kenya legalised it.

“There is nothing wrong with smoking it when it is legalised and the regulatory bodies have approved for it to be smoked,” he says. 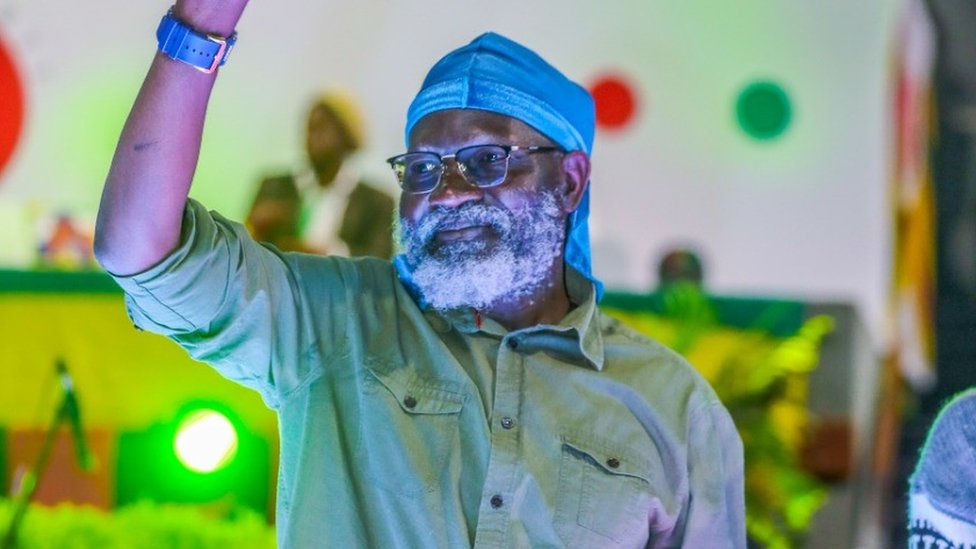 Prof Wajackoyah’s views have been condemned by Kenya’s Catholic Church, which says that drug abuse among youth would worsen if marijuana was legalised.

“The family unit is being threatened by drug abuse leading to breakups, violence and even deaths at times,” Bishop James Maria Wainaina says.

Prof Wajackoyah has also promised a review of all contracts awarded to Chinese companies by outgoing President Uhuru Kenyatta’s government.

China accounts for 21% of Kenya’s foreign debt causing a national outcry, especially as the terms of the contracts – mostly to build infrastructure, such as roads and railways – have not been made public.

He says snake venom, which he claims is “more expensive than gold”, will be extracted to produce anti-venom for medicinal use, while snake meat will be exported to countries such as China, where it is regarded as a delicacy.

“We can have a billion dollars every year to sustain the economy,” Prof Wajackoyah says, without releasing any evidence to back up the figure.

He also says that Kenya should export the testicles of hyenas, which are used for medicinal purposes in China, saying that could earn more than marijuana.

Wildlife groups and the Union of Veterinary Practitioners of Kenya have reacted with outrage.

“Trade in hyena testicles and snakes is disallowed and a threat to the existence of the wild species,” the vets’ union says in a statement.

It adds that the proposal is “a recipe for another pandemic” because it could lead to the spillover of viruses, bacteria and parasites from hyenas and snakes to human beings.

Despite him being condemned for what critics call a populist campaign, Prof Wajackoyah’s supporters admire him for overcoming enormous odds in life to run for president.

He grew up rural western Kenya, and after his parents separated he ended up living on the streets of the capital, Nairobi.

He was rescued by worshippers at the Hare Krishna temple, who were feeding homeless people.

Prof Wajackoyah lived in the temple and became a Hare Krishna priest.

He was sponsored to complete his secondary education and later joined the Kenya police, rising through its ranks to join the intelligence unit.

Though he has been vague on details, Prof Wajackoyah says he ran into trouble after picking up sensitive information about one of the most high-profile murders in Kenya, that of Foreign Minister Robert Ouko in 1990.

Prof Wajackoyah says he was arrested and tortured and after being released he fled Kenya with the help of the US embassy in Nairobi.

Mr Ouko’s murder remained a mystery to the public until a parliamentary inquiry in 2010 revealed that he was killed at one of the official residences of then-President Daniel arap Moi.

While studying in Wolverhampton he also worked as a security guard, a grave digger and a washer of dead bodies in order to earn a living.

The jobs “humbled and matured” him, he told the Daily Nation newspaper.

He says balancing school and work saw him score a third class honours in law. It is not regarded as a good pass.

He was involved in political campaigns in the UK to push for change in different parts of the world – and worked closely with Ghana’s former President Jerry Rawlings, who took power in a coup in 1981 and ruled until 2000.

Prof Wajackoyah later relocated to the US, where he met his African-American wife. The couple reportedly have three children.

He has also studied at various US institutions, including acquiring a PhD from the online Walden University.

He claims to have a total 17 degrees, mostly in migration, international and refugee law, prompting Gaitho to cynically remark that he boasts “more university degrees than the time required to actually sit through all those courses”.

Prof Wajackoyah returned to Kenya in 2010, declaring that he wanted to run for president.

He abandoned his ambition at the time, only to revive it in this election to become what one of Kenya’s leading newspapers, The Standard, has called a “sensation on the campaign trail”.

In other controversial campaign promises, Prof Wajackoyah says he will improve work-life balance by introducing a four-day week, giving Muslims time off to worship on Fridays, Adventists on Saturday and other Christians on Sunday.

Prof Wajackoyah has also pledged to bring back the death penalty, and says those convicted of corruption will have the choice of being executed by firing squad or by hanging “after eating some ugali [corn meal, a staple in Kenya]”.