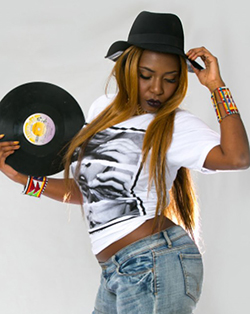 ARMED with a clutch of sizzling hits and a fast-growing fan base in her native Kenya and across East Africa, Afro-soul sensation Dela is set to wow her London fans with a performance this weekend at Mama Jumbe’s.
The Afro-themed restaurant and late night entertainment venue has carved an unmatched reputation as East London’s premier spot for live performances by some of Africa’s most talented emerging artists.
Dela’s shows, pencilled for Saturday 11th and Sunday 12th November, come as part of Mama Jumbe’s newly unveiled artists-in-residence project. Over the past month, the venue has hosted live performances by Nairobi-based Ugandan saxophonist Brian ‘Buula’ Mugenyi and Zimbabwe’s edgiest comedian, Q Dube.
Terrence Jumbe, owner and manager of the Newham-based restaurant and entertainment venue, said: “We’re very excited about Saturday’s show, first for the explosive experience that we know Dela will bring with her performance, and secondly because this is an opportunity for her to expand her wings beyond her core fan base.”
“Mama Jumbe’s is where lovers of African cuisine, music and culture from diverse backgrounds come to hang out, dine and have a great time.
“And with our new project bringing break-out artists to the UK from different parts of Africa, I can certainly say we’ve become one of the leading venues on London’s African entertainment scene,” Jumbe added.
For her legion of Kenyan and East African fans, the 27-year-old Dela needs no introduction. With hits such as ‘Mafeelings’, and ‘Mama’, her ode to mothers, for which she scored a world first by recording it in four languages, Dela has boldly staked her claim to the crown as queen of Afro-soul.

Her powerful, soulful voice is as mellow as it is enchanting in songs such as her wildly popular Swahili cover of Adele’s ‘Hello’ and the upbeat ‘Ahadi Zako’ (http://tinyurl.com/hjua645) in which she pines after a lover who has betrayed his promises to her.
Following Dela’s shows this weekend, the eclectic roster of performances will continue over the coming weeks with Zimbabwe’s leading female Afrojazz sensation, Edith WeUtonga, and Ugandan rapper Mun-G. More acts are set to be announced soon.Advertisement

The dancefloor and stage at Mama Jumbe’s is located downstairs from the restaurant. Much like the iconic Jazz Café in Camden, which is adored by patrons for its sheer intimacy, Mama Jumbe’s allows performers and fans to interact up close, making the experience especially personal and memorable.
The restaurant opens for food and drink service from 8pm on Fridays and Saturdays and 3pm on Sundays, morphing into a music and dance venue from about 11pm. For more details and tickets for the upcoming shows, see www.mamajumbes.com/events.