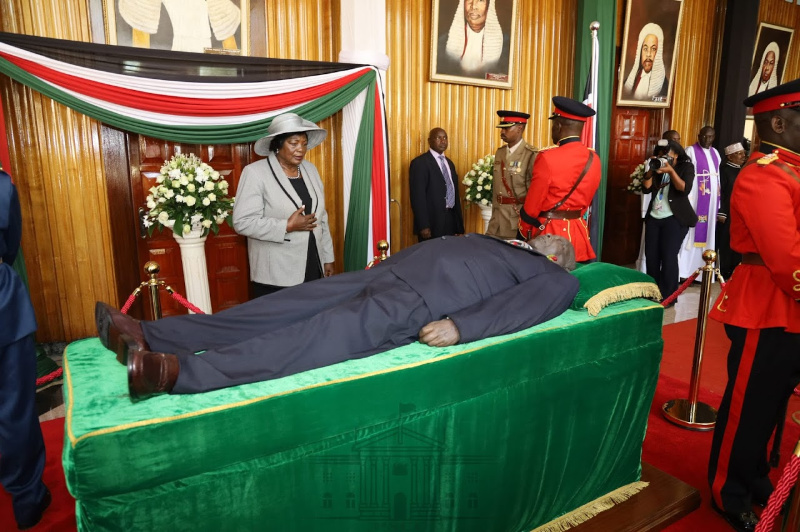 Kenyans formed long queues on Sunday to glimpse the body of the country’s longest-serving leader, Daniel arap Moi, lying in state ahead of a state funeral.

His body will lie for public viewing in Nairobi for three days, until a memorial service with full civilian and military honours on Tuesday.

The body of the late president who towered over Kenya between 1978 and 2002 was escorted by military guard through the streets of the capital to the parliament building, drawn on a gun carriage and wrapped in the national flag.

Many of those queuing Sunday had come to pay their respects to a ruler they revered, while others stood in disbelief that the man they had long feared was gone.

Magdalene Njoki, a vendor, travelled with her two children from Thia, about 50 kilometres (31 miles) from Nairobi, to thank the president who provided free milk in school under a Moi-era policy.

But Moi leaves a mixed legacy. During his tenure, corruption became endemic and tribal divisions were stoked and turned bloody, but many also remember a period of relative peace in Kenya as east Africa was roiled by conflict.

Justin Otello, who also queued to see Moi’s body, said “even the mention of his name” could evoke fear.

“I can’t believe that is Moi’s body lying there. That man who terrorised this country is now sleeping there, motionless,” he said.

Nixon Ind eche, a retired public servant, said she was “going to see his body for closure”.

“He detained a lot of people without trial and destroyed our economy, but all that is in the past now because he asked for forgiveness publicly,” he said.

In neighbouring Ethiopia, at the African Union headquarters in Addis Ababa, a brief moment of silence was observed Sunday by visiting leaders and dignitaries before an annual two-day conference got underway.

President Uhuru Kenyatta, who on Saturday led the tributes for Moi on the first of his three days in state, remembered “a father of our nation, a champion of Pan-Africanism”.

In recent years observers had criticised the apparent rehabilitation of Moi as the elderly former president often received visits from Kenyatta, his opposition rival Raila Odinga and other politicians, seeking his blessing ahead of elections.

Kenyatta revived “Moi Day” in honour of the former president in 2017, after it was scrapped in 2010.

Officials said around 23,000 people saw the body on Saturday, though a final figure is not expected for some days. Sunday’s longer viewing hours could draw a bigger crowd.

His body will be buried Wednesday in his home area of Kabarak, 220 kilometres northwest of Nairobi.