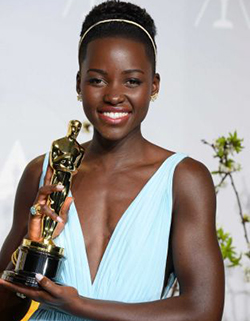 LUPITA Nyong’o won the Oscar for best supporting actress on Sunday for her role as the hardworking slave Patsey in drama “12 Years a Slave,” capping a breakout awards season for the Yale-trained Kenyan actress.
Nyong’o, 31, won the Oscar in her first feature film role, earning a thunderous standing ovation from the Hollywood audience.
She beat fellow frontrunner Jennifer Lawrence’s portrayal of a loopy housewife in caper “American Hustle” in one of the most closely-watched Academy Award races this year.
“Yes!” the actress exclaimed when accepting the award after hugging her brother, “12 Years a Slave” director Steve McQueen and other actors in the film.
“It doesn’t escape me for one moment that so much joy in my life is thanks to so much pain in someone else’s, and so I want to salute the spirit of Patsey, for her guidance.”
Nyong’o, who earned the same award from her peers at the Screen Actors Guild Awards in January, was chosen for the role from some 1,000 young actresses who auditioned.
She received plaudits from critics for her depiction of suffering as a field-working slave and the object of sexual desire from her master.
The award marks Nyong’o’s coronation into the top echelon of dramatic actresses working in Hollywood. She has also burnished her image as a new emblem of high fashion with her styles on the red carpet.
“12 Years a Slave,” by British director McQueen, is based on the memoir of Solomon Northup, a 19th century free black man tricked and sold into slavery.

Nyong’o’s Patsey, who is able to pick more pounds (kilos) of cotton per day than the stronger male slaves, embodies resilience in the drama even as the primary recipient of physical and sexual violence.
“There was an underlying stream of grief at all times even in the lighter scenes,” Nyong’o said last year while promoting the film.
“There is a deep pain in Patsey throughout and living in that pain was not easy.”

Dressed for the occassion … Lupita Nyong’o at the oscars