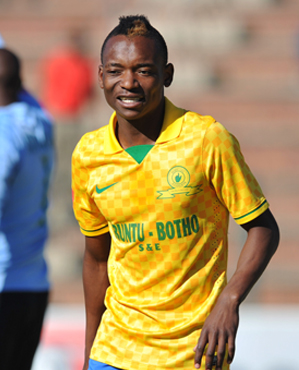 MAMELODI Sundowns kingpin Khama Billiat headlines the list of Zimbabwean players based in the PSL that have been called up for international duty this weekend.
The Warriors face Tanzania in a friendly game at the National Sports Stadium in Harare on Sunday – a match that forms part of The Warriors’ preparations for the 2017 AFCON finals in Gabon.
It had been thought that Billiat would again be rested after being excused for the dead rubber AFCON qualifier against Guinea in September but Warriors coach Callisto Pasuwa seems to have had a change of heart.
Billiat will now be back in his home town this weekend for the FIFA calendar week and will be amongst seven players playing in the PSL that have been named in the squad.
The Warriors selectors have chosen to ignore the experienced Tapuwa Kapini who has making a good case for selection with solid performances for Highlands Park who he captained to promotion.
Polokwane City goalkeeper George Chigova also continues to be left out despite playing regularly at his club with preference given to local keepers.
As many as 20 Zimbabwean players are attached to PSL clubs and available for selection for the Warriors but several players who have shown good performances like Marshall Munetsi, Blessing Moyo and Evans Rusike have not been selected for various reasons.
The Warriors are due to report for camp on Wednesday.
Goalkeepers: Bernard Donovan, Tatenda Mukuruva, Nelson Chadya
Defenders: Tendai Ndlovu, Teenage Hadebe, Oscar Machapa, Lawarence Mhlanga, Bruce Kangwa, Hardlife Zvirekwi, Onismor Bhasera
Midfielders: Kudakwashe Mahachi, Danny Phiri, Raphael Kutinyu, Marshall Mudewe, Marvellous Nakamba, Willard Katsande
Forwards: Knowledge Musona, Khama Billiat, Tendai Ndoro, Cuthbert Malajila, Tino Kadewere, Nyasha Mushekwi, Mathew RusikeAdvertisement