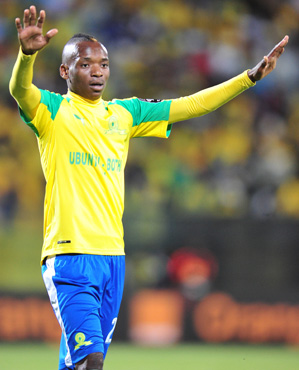 SOUTH Africa: Mamelodi Sundowns forward Khama Billiat admits to player fatigue but strongly believes they can mentally overcome their struggles to power on in their quest for glory.
Downs have not had a proper ‘off-season’ break since the end of the 2014/15 season, having continued all the way to becoming champions for the first time in the club’s history in the 2016 CAF Champions League campaign.
This year, they have again qualified for the group stages of the continent’s premier club competition, and once again risk not having a few weeks off ahead of the 2017/18 domestic season.
Pitso Mosimane’s side recently went on a five-game winless run, managing only one goal during that period, before they finally managed to turn their fortunes around by putting five goals past city rivals SuperSport United in their league tie last week.
Having also edged Free State Stars on Sunday, The Brazilians are looking more and more like a worn-down outfit as league catch-up games continue to pour in, with their next assignment a re-match with Matsatsantsa on Wednesday evening.
Billiat, who recently returned from injury and is still rediscovering his devastating form that saw him walk away with his hands full at last season’s Absa Premiership awards, believes fatigue is just a small hurdle on their road to success, and says a good attitute and mental strength can carry them through the finish line.
“Fatigue is always going to be there but you can still win games with fatigue if your mind is right, if you’re well-managed and you’re more hungry than people that aren’t fatigued,” defends the Zimbabwean international.
“I think we have played more games and we should be well motivated, knowing that this is our life – you’re always going to play more games than others if you want to live in the Champions circle.”

Having been knocked out of the Nedbank Cup by Golden Arrows, the 26-year-old marksman admits facing tougher challenges against ‘small teams’, but emphasises that they cannot afford to be selective of which teams they perform against and which teams they can relax for.
“Playing small teams is more difficult because they all just want to beat you, every game we don’t look at it differently – this is Arrows, this is Chiefs – they’re all the same,” he adds.
“In fact, Arrows give you an even harder challenge than Chiefs because they just want to beat Sundowns, they want to beat a big team, and everyone wants that so it becomes harder.
“We don’t have games whereby we can choose – this one we can play a little bit, this one we can play more – we just have to be on top of our game, every game, because you get a shock of your life if you go to a game thinking it’s a small team and they give efforts of big players.”
Billiat refuses to complain that they have played over 40 games so far this season, and instead feels it comes as an advantage as they have gained more experience than their counterparts over the last 10 months.
“I think it helps [that we’ve played more games]. You see more of your mistakes and get to rectify them in between the games. The more you play the more experience you get to see more things than other teams playing fewer games,” he argues.
“We should take advantage of that, although it will catch up to us but let it catch up while we have experience and know how to deal with one game rather than not being able to play more games.”