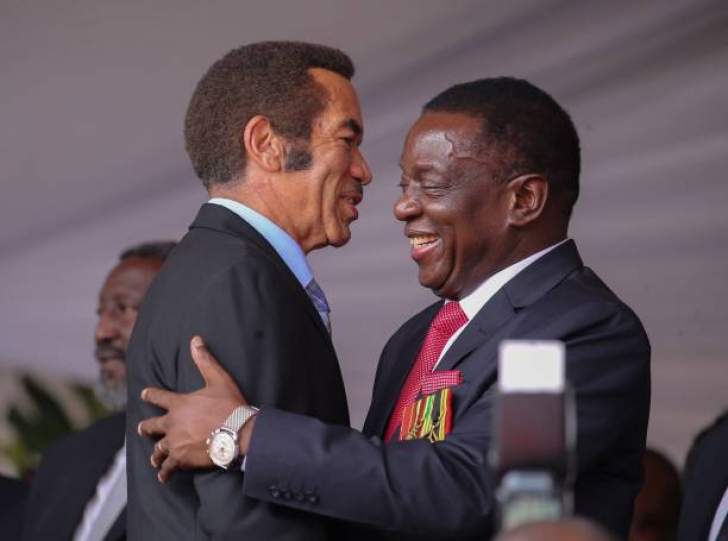 OUTSPOKEN former Botswana leader, Ian Khama has urged Zimbabweans to press harder in their quest to free themselves despite renewed onslaught on citizen freedoms by President Emmerson Mnangagwa.

“Time has come for Zimbabweans to do something much more. Even if it means a personal sacrifice, withdrawal of labour crossing the borders to make neighbouring states pay attention to what is happening in Zimbabwe,” said the ex-leader in an interview on Botswana’s Duma FM.

The former President said he attended the inauguration in the hope Mnangagwa would keep promises of restoring the troubled country to good fortune.

“I was really happy to share the words he (Mnangagwa) expressed at that inauguration about how he planned to take the nation of Zimbabwe forward. Coming away from that event, I thought to myself that this is great news and I wished him all the best,” he said.

At the time, Mnangagwa had ousted Robert Mugabe as President with assistance from the military.

Said Khama, “I saw this as an opportunity for Zimbabwe to break from the past ways of doing things as there were indications that the country will be on the path to prosperity again.

“Sadly, that part of the letter which hoped that there would be a new dispensation unfortunately has not happened and Zimbabweans are saying their situation is now worse than it was under Mugabe.”

Khama said Zimbabwe needed free and fair elections to allow its citizens to exercise their democratic right to choose their leaders.

“The problem is that there has been rigging of elections which has not allowed that to happen as we now hear from Zimbabweans who have come to work here,” Khama said.

The ex-leader said Zimbabweans were suffering from a lot of difficulties.

“That country has so much potential, the biggest and greatest resource are the people who are able to turn things around. I think that is a starting point,” he said.

He urged Zimbabweans to keep trying their best despite hanging on to hardships for too long.