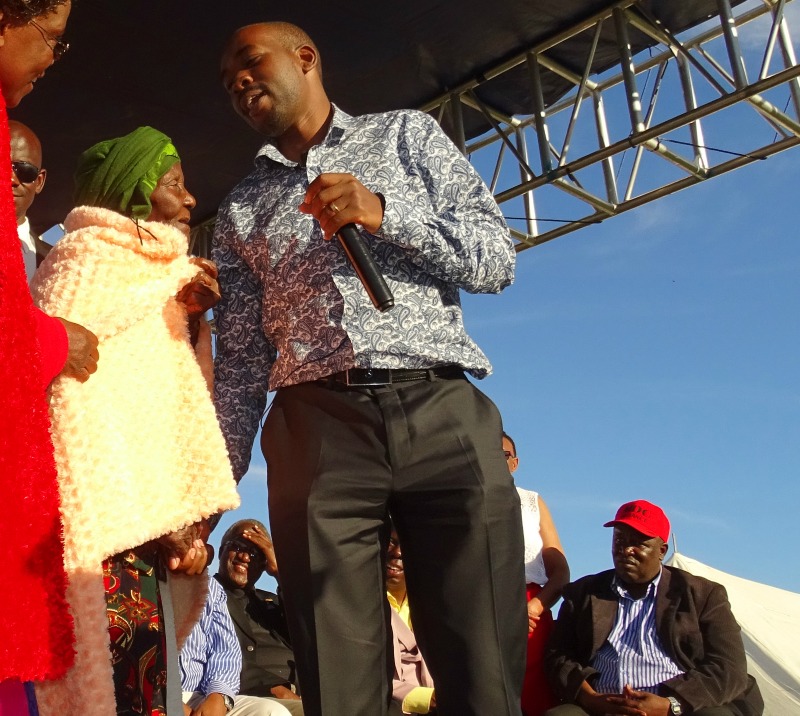 Nelxon Chamisa with the granny
Spread This News

AN elderly woman from Matabeleland, whose video while declaring her support for MDC Alliance presidential candidate Nelson Chamisa went viral on social media, is reportedly being victimised for her political preferences.

The woman, who cannot properly pronounce the presidential hopeful’s name, instead calling him “Khamisa”, was part of the crowd which thronged the MDC Alliance rally at White City Stadium in Bulawayo on Saturday.

The defiant granny has almost become a celebrity after the video.

In the video, the granny is heard saying, “Siyamuthanda (Thokozani) uKhupe but sizadliwa, so sivotele uKhamisa. (We love Khupe but we will lose if we vote her so let us vote for Chamisa).

The unidentified woman was aided to the top table where she had been invited by Chamisa to greet as well as introduce her to the supporters amid deafening applause from the crowd.

“I heard that my grandmother who said uKhamisa Siyamuthanda is here. Please gogo come to the stage so that I can introduce you to the people. I have never seen you before and I just saw you in the video but today I am very excited because I have seen you live,” said Chamisa.

The granny told Chamisa that following the video publication, her security was now at risk because some people were threatening to kill her for supporting the MDC Alliance presidential candidate.

The woman however did reveal the identity of the people allegedly harassing her.

“Gogo is saying she is now living in fear after receiving death threats. She is also telling me that she is being harassed and victimised every day for endorsing me. How can you harass such an old woman for her beliefs?” Chamisa said on loud speaker.

The grandmother also told Chamisa that she was very pleased to see him whilst she was still alive.

“Gogo, I want to assure you that you will not die before my victory,” Chamisa declared.