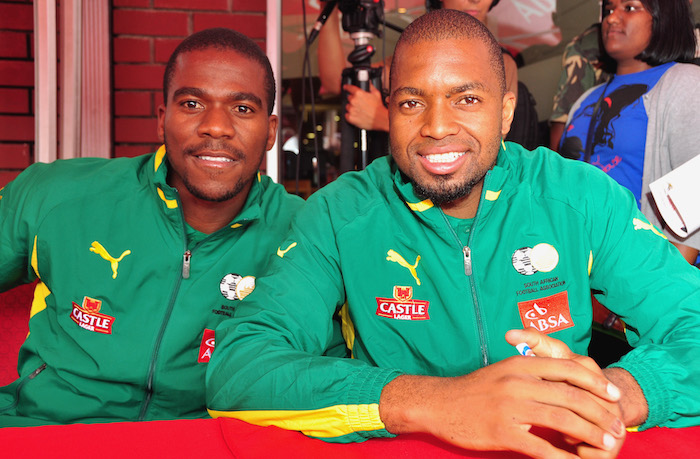 Itumeleng Khune has described his friendship and rivalry with Senzo Meyiwa – and the dreams they had as youngsters from their time in junior national teams – as a headstone for the late Bafana Bafana captain was unveiled in Chesterville‚ Durban, on Tuesday.

“I have a lot to share about my life with Senzo, but I will try to summarise everything‚” Khune said at another ceremony at Moses Mabhida Stadium.

“I think when we first met we were 15 and we were like‚ ‘We want to take over as national team goalkeepers.’ We also wanted to be in the [Soweto] derby‚ the match between Chiefs and Pirates — one of the greatest derbies.

“So we pushed each other from the Under-17s. I remember we were playing at an interprovincial tournament in Polokwane sponsored by Coca-Cola‚ when Senzo and I were chosen to represent Gauteng.

“The coach was confused about who to play as his No 1 … If he had means he could have taken half myself and half of Senzo and made it as one. And yes‚ it wasn’t possible‚ but we managed to play three games each and we performed well and had clean sheets.

“We went all the way to win the goalkeeper of the tournament. We were also called into national U-17 team and when we arrived there we also gave the coach stress about who he was going to make No 1.

“So that’s how our friendship‚ our rivalry and the competition started. From the U-17s we went to the U-20s and also to the U-23s.”

Khune said such conundrums continued as he and Meyiwa progressed through the age groups.

“We were coached by Steve Komphela in the U-23s. Every time he selected his starting XI, he would start from the defence to the strikers and leave the goalkeeping without adding myself or Senzo.

“That’s how we were giving him a headache. So he would always ask the players to vote on who should be in goals for a certain match. And the players would also say‚ ‘They’re both good so we don’t know who should keep goal.’

“That’s what I liked because we would push each other to an extent of giving our coaches a good headache on who they should pick.”

Just before his death, Meyiwa established himself as Bafana No 1 under Shakes Mashaba with some storming performances in the qualifiers as SA reached the 2015 Africa Cup of Nations finals at the expense of nemesis Nigeria. 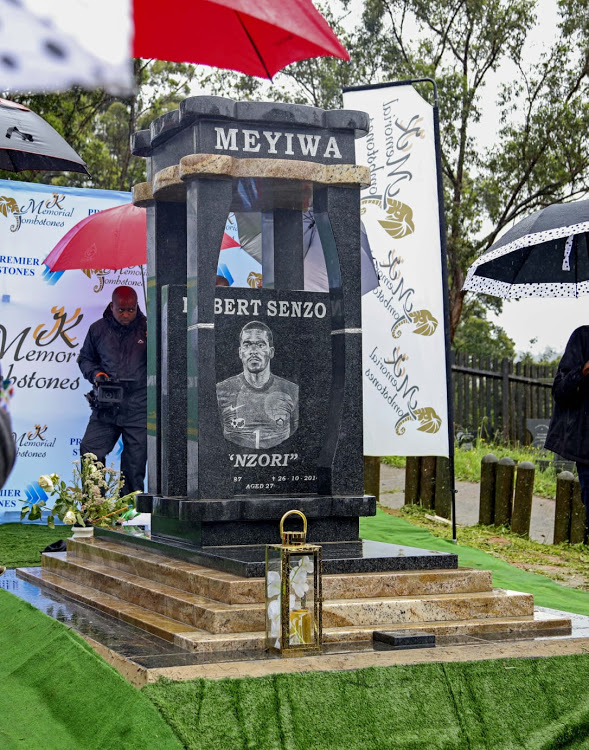 “Mashaba made him captain of Bafana. I was so proud of him because I’d played more games than him in Bafana and he was waiting for his opportunity to come. When it came he took over‚ played well and we qualified for Afcon‚” Khune said.

“I was so proud of him that he would also tick the boxes that he had done things in his playing career‚ because these were things we were dreaming about when we were young.

“We’ll always remember you Senzo — rest in peace for us and I hope we get justice very soon.”

Safa president Danny Jordaan told the gathering that the five arrests made last month in Meyiwa’s murder case hold promise of bringing to an end the protracted saga of the investigation into the beloved keeper’s death.

“Now we can say at least that we can unveil the tombstone of Senzo today.”