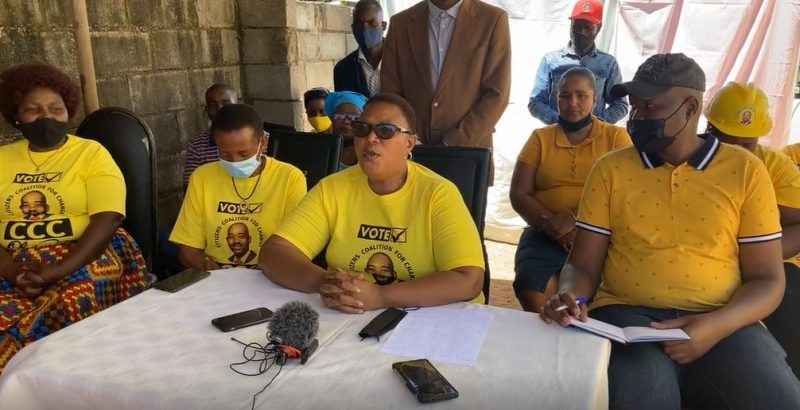 MDC Alliance spokesperson Witness Dube has described MDC-T president Thokozani Khupe as an old yellow born who fell off King Lobengula’s scorch cart, after her decision to throw her weight behind the Nelson Chamisa-led Citizens Coalition for Change (CCC) ahead of Saturday’s by-elections.

Khupe announced this in Bulawayo while clad in CCC colours and a yellow t-shirt emblazoned with party president Nelson Chamisa’s face.

Dube made fun of the move, mocking her for attempting to join a party which came up as a result her unending fights.

“Vote for the people I fired. I am leader of the MDC-T, but I am part of the CCC,’’ says an old lady, a yellow born who fell from a Lobengula’s coach cart,” Dube said.

“The coalition of political turncoats and career politicians is gathering mess! See them play their casino politics to the wire, and then a scene of political carnage will emerge. Meanwhile we repair what damage they had caused to the people’s project,” he added.

“The head is a failed 2013 organiser best known for satirical skills about Baba Jukwa. The limbs are Tendai Biti certified as believing in nothing by Tsvangirai. Others are Welshman Ncube, Job Sikhala and other Zanoids. Enter cc Thokozani Khupe the fishmonger! What a new movement!.”

Zambia’s ruling United Party for National Development (UPND) spokesperson Joseph Kalimbwe warned his CCC counterparts, Khupe was not to be trusted and should not be given any leadership position.

“Let them endorse but never give them any political position. Anyone who stood in the way of the citizens and their ability to achieve victory must never be politically trusted with positions of influence. They will destroy again,” Kalimbwe said.

The CCC is yet to comment on the matter despite Chamisa having declared membership and positions in the new party open to anyone who is ‘a citizen of Zimbabwe.’

“You cause by-elections by recalling MPs then hold a presser to support them in their bid to go back to parliament ? Only fools will take that as genuine,” said Mawarire.

“Khupe is Gen’s project and sadly some top CCC leaders, not Prof Welshman, are pushing that agenda on behalf of the Gen, chatopindwa chinhu chenyu icho…”