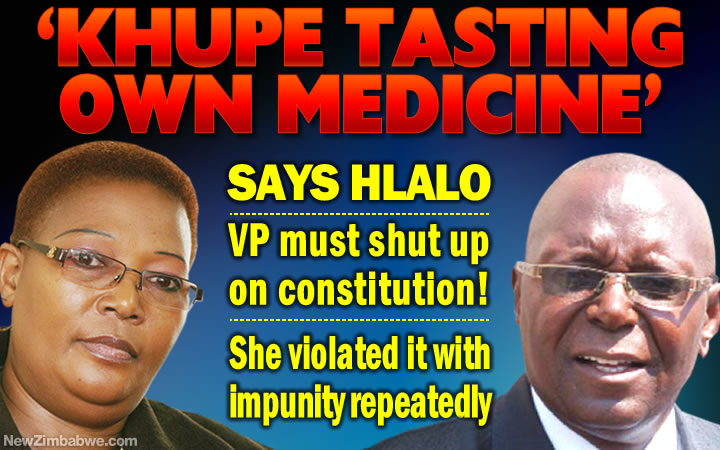 Chamisa has since taken over as interim leader but Khuphe says the process he used was illegal. She is adamant that, as the party’s only elected vice president, she must take over after Tsvangirai’s death from colon cancer in South Africa.

However, Hlalo said Khuphe should not talk about constitutionalism when it suits her, saying the former deputy prime minister repeatedly violated the party’s charter with impunity.

Hlalo was expelled from the party in 2016 after a successful high court challenge against the results of the party’s 2011 provincial elections which had been won by Khupe’s ally, Gift Banda.

“I am surprised that Khuphe is now suddenly talking about constitutionalism when she has been the one who has been disregarding the constitution,” said Hlalo who is not a member of the rival People’s Democratic Party (PDP).”

He continued: “Where has she (Khuphe) been all along when I was unconstitutionally expelled from the party?

“She has been suspending and co-opting people into senior leadership positions without following the party ‘s constitution.

“She should just keep quite because, when it comes to constitution violations, she is worse.”

The former senator continued; “I will never sympathise with Khuphe because she now literally tasting her own medicine.

“Ask any honest MDC-T member in Bulawayo and (they) will tell you that Khuphe has been running that party like her personal property against the dictates of the constitution.

“I am no longer interested in MDC politics, but I thought the nation should know that Khuphe does respect the constitution of the party.

“Unfortunately, when we tried to question her unconstitutional tendencies, she was protected and supported by the late (Morgan) Tsvangirai.”

ZIPRA veteran Max Mkandla agreed with Hlalo, accusing Khupe of being an accomplice in repeated constitutional violations from the time the party was formed in 1999.

“We do not want people who are quick to talk about constitutionalism when things are not going their way but when the same constitution is violated at their advantage they keep a deafening silence. This is what hypocrites do.”