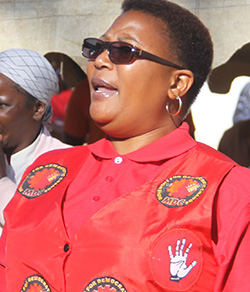 MDC-T Vice President Thokozani Khuphe has supposedly suffered rejection from her own Bulawayo province whose executive on Saturday affirmed support for co-VP and rival Nelson Chamisa.
Since party leader Morgan Tsvangirai was forced to take a break from politics to concentrate on his long battle with colon cancer, the MDC-T has seen its three VPs scuffle for party control.
There are strong signs Tsvangirai might finally surrender his job as his health problems continue to mount.
His departure for treatment in South Africa has been followed by conflicting and often unconfirmed statements attributed to him regarding both his health and who among his three lieutenants should act on his behalf.
Matters came to a head this past week when Tsvangirai’s spokesperson Luke Tamborinyoka released a statement claiming his boss has appointed Chamisa as acting party President while also being party principal to the MDC Alliance.
This was vehemently disputed by co-VPs Khuphe’ and Elias Mudzuri’s camps with MDC spokesperson Obert Gutu also joining in to trash the claims.
The MDC-T leadership feud has, in the meantime, sucked in Alliance partners and lately party structures with the majority pledging support for Chamisa.
Khuphe, on her part, is adamant she is the only elected VP of the three and should, thus, deservedly become acting President.
Her bitter relations with colleagues date back longer than the current feud, having started at the time the party took a decision to forge a united front against Zanu PF.
Khuphe and allies insist they wield influence in the most important party support base of Matebeleland which has overwhelmingly voted MDC-T since formation in 1999.
But a statement released by MDC-T Bulawayo provincial executive spokesperson, Felix Magalela Mafa Sibanda on Saturday speaks to the contrary as it affirms support for Chamisa.
“The Bulawayo provincial executive and all its subordinate structures hereby this day, of 10th, February 2018, affirms and confirms the appointment of Hon, Advocate, Pastor Nelson Chamisa as the effective Acting president of the Movement of the Democratic Change, (MDCT) henceforth,” reads the statement.
“We as the executive same province (sic), are extremely excited and are on cloud 7 because this appointment to navigate the MDC ship to the end of its voyage it started in earnest 1999.Advertisement

“We therefore, applaud the president Dr Morgan Richard Tsvangirai for his star appointment. We therefore, pledge our unwearying (sic) support to Vice president, Chamisa and the entire MDCT leadership from branches to the National council.”