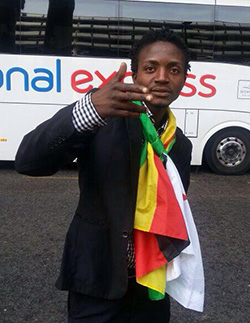 SUCCESS and controversy is stalking Zimdancehall star, Killer T after the death of his alleged socialite girlfriend, Mitchel Kambanga.
But the popular Mbare-raised artist has vowed to put the storm behind him, having lined up collaborations with Fungisai Zvakavapano, a new singles CD and videos for his high riding album, Ngoma Ndaimba.
Killer T opened up to NewZimbabwe.com for the first time after the death of Kambanga, popularly known as Mimi whom he is alleged to have had an affair with.
There have been mixed reports over Mimi’s death amid social media claims that they were drag racing, which have since been refuted.
Killer T cancelled all his shows ahead of the Busy Signal performance in Harare last week and will now perform in to Zvishavane this weekend.
There has been a storm over his involvement with Mimi, an 18 year old socialite who crashed into an electricity pylon in the early hours Monday last week.
“There was no drag race as the WhatsApp messages are purporting to say. It was an accident that I witnessed as I was driving ahead of the car and I actually took the girl to hospital,” said Killer T in an interview at Mbare’s Matapi hostels.
Other sources said Mimi’s parents initially wanted to press charges against Killer T for his involvement with the girl after tests showed that she may have been drunk when the accident happened.
However, according to those familiar with the issue, the police saw no criminal conduct in the Zimdancehall star’s conduct.
Killer T has however stressed that he is putting the controversy surrounding the death of Mimi behind him.
He confirmed reports that he and Fungisai were working on a collaboration song, in addition to confirming Alick Macheso’s keenness to join hands for a song which will be included in the sungura maestro’s upcoming album.
Matthias Mhere and Killer T have already released a collaboration song titled Wenyasha Ungamudii that is doing well.
NewZimbabwe.com is also reliably informed that the Zimdancehall star is in demand, with other musicians such as Jah Prayzah and Sulumani Chimbetu keen to rope him in for their new projects although he would not confirm this.
“Who told you about the Fungisai collaboration? It is still something we are planning and working on and once we have put it together we will announce that we are releasing a joint effort for a song,” he said.Advertisement

Killer T, who is tipped to win the Zimdancehall artist of the year for 2015, confirmed that he will be releasing a 12 track singles collection CD.
The CD will be released at the weekend and the songs are currently being recorded and mastered at his Hot Property studio in Mbare and others at the Kenako Music studio in Borrowdale.
Other Zimdancehall stars such as Kinnah, Tocky Vibes, Jah Luv and Winky D have been releasing singles in the past few weeks as Zimbabwean music lovers warm up for summer and ahead of the festive season.
Moses Matyora, a vendor who sells music CDs at a service station along the busy Samora Machel Avenue in Harare said Jah Prayzah and Killer T were the hottest selling artists.
He said a collaboration between the two artists would be an instant hit with music lovers, especially ahead of the festive season.
“Business is okay for me and I am managing to get a small profit from the CD sales which I buy at Mbare Musika for resale here in town.
“The artists that are top selling at the moments are Killer T and Jay Prayzah and sometimes I run out of stock for their CDs,” he said.
Killer T — Amai Vangu