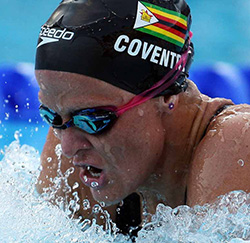 KIRSTY Coventry, the 2004 and 2008 Olympic backstroke champion from Zimbabwe, was elected a vice-president of the International Surfing Association (ISA) in The Azores today.
Unopposed for the role at the governing body’s annual general meeting taking place during the 2016 World Junior Surfing Championships off the coast of the Portuguese islands, Coventry became the first African woman to land the vice-president role.
Coventry, who raced at Rio 2016 after making a comeback, replaces Layne Beachley of Australia. The African swimmer is an ambassador and Athlete’s Committee Member for the World Anti-Doping Agency (WADA) and has been a member of the International Olympic Committee’s Athletes’ Commission since 2013.
Surfing has just been added to the family of Olympic sports.
Speaking through the ISA, Coventry said: “I am thrilled to be joining Fernando [Aguerre, president of the ISA] and the ISA team as vice-president at such an exciting time following Surfing’s inclusion in the Tokyo 2020 Olympic Games. I am looking forward to getting to work as we prepare for the sport’s ground-breaking debut in Tokyo and beyond.
“Surfing expresses a unique and modern blend of sport performance, culture and a connection to nature that resonates with my own global outlook. Throughout my career, both as an athlete and as an administrator, I have been presented with some amazing opportunities and I am excited to be starting this new adventure with the ISA.”Advertisement