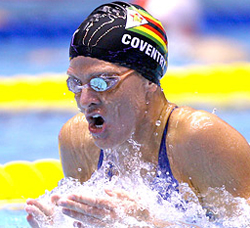 BACK home in Zimbabwe, Kirsty Coventry is Michael Phelps.
But in the North Carolina city of Charlotte in the US, where she moved last month with her husband, Coventry is an anonymous 30-year-old woman.
Put her in a pool, though, and you start to understand why Coventry is a worldwide swimming star hoping for one last triumph after a disappointing Olympic experience in 2012.
“I just didn’t want to walk away with that ‘What if?” feeling, Coventry said over coffee recently in uptown Charlotte. “So I’m here to give it one more shot.”
Zimbabwe is a country that has long struggled with economic difficulties and political strife. Coventry became a swimming prodigy from that unlikely background. Auburn University in Alabama gave her a scholarship, and she excelled.
In the 2004 and 2008 Olympics, Coventry won a total of seven individual medals – mostly in her specialty, the backstroke.
Zimbabwe, as a country, has won only eight Olympic medals, adding a women’s field hockey gold in 1980 to Coventry’s seven.
After the 2008 Olympics, Coventry was called a national treasure by government officials and received $100,000 from President Robert Mugabe – she then gave a significant amount of it away to various charities.
But Coventry’s 2012 Olympics in London were a struggle. She didn’t win anything.
“I dislocated my knee four months before London, and then I got pneumonia two months before and was back in the hospital,” Coventry said.
“So my lead-up wasn’t great. I still made the finals (top eight) in my two top events. But I just thought if I walked away then, it wasn’t really going to be on my terms.”
Charlotte has the most successful swim club in the US. So she has come to Charlotte, re-joining her old Auburn coach, David Marsh. Marsh now heads SwimMAC Carolina, that includes “Team Elite,” a group of mostly post-college swimmers who all have Olympic goals.
Coventry will turn 31 next month – that’s fairly ancient for most elite swimmers.
“Most people look at me and say, ‘Isn’t that old? Aren’t you expired?’ ” she said with a laugh.
But she has drawn inspiration from swimmers like Dara Torres, who won Olympic medals for the U.S. in her 40s.
She believes Marsh’s innovative training techniques, which emphasize quality over quantity, will help her win one more medal in 2016.Advertisement

If Coventry can do that, she will become the female swimmer with the most individual medals in Olympic history.
She is currently tied with a Hungarian swimmer who also has seven. (Coventry has never gotten to pad her statistics with relay medals like most U.S. Olympic swimmers can because she is usually the only swimmer from Zimbabwe who qualifies for international meets).
“I’m looking for my best chance of getting to the podium in 2016,” Coventry said. “One more medal – it doesn’t matter what colour.”
This week, Coventry is in China. As one of the more respected athletes in the Olympic community, she works frequently with the International Olympic Committee.
Her job this week is to warn young athletes about the perils of their sports – drugs and excessive entourages, for instance – while also educating them about the need to develop a plan for life after competition.
“Kirsty kind of takes a motherly role with them,” said Ty Seward, a fellow Zimbabwean who married Coventry a year ago and is now her business manager. “She says, ‘Guys, come over here. Let me tell you a story.’ ”
Coventry and Seward do not have kids but hope to after the 2016 Olympics. They have spent less than a month in Charlotte but – depending on how the next two years go –say they may locate in the city permanently.
“My parents are in Zimbabwe,” Coventry said, “so there will always be that connection. But I’ve mostly lived in the U.S. since college, Ty’s family is mostly in America, and we are looking for a permanent place to raise kids. We hope that Charlotte will become our long-term home.”
This article was originally published by the News Observer.