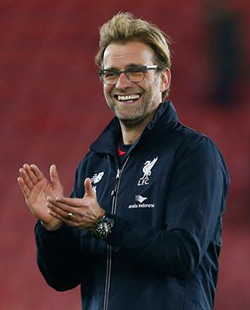 LIVERPOOL manager Jurgen Klopp believes the international break will not affect his side’s momentum as they look to consolidate their position at the top of the Premier League.
The Reds, who are a point clear of second-place Chelsea, travel to Southampton on Saturday on the back of seven wins in their last eight league fixtures.
Klopp has had less time to work with his players this week, with the majority of them away from the club’s Melwood training base on duty with their national teams.
But the German remains confident that the impetus and synergy shown by his players over the course of recent weeks has “absolutely not” been impacted upon.
“Momentum is something you can talk about after the game and then we can say we have to use the momentum again, but nobody knows how it works,” he said.
“What’s momentum before the game? Let’s try to do our best, let’s try to play football, let’s try to do what we spoke about, let’s try to use what we saw when we prepared for the game and all that stuff.
“The momentum is not something you have to talk about before the game, so I don’t think about it. It’s the same situation for all the other teams, too.”
Liverpool are set to be without Adam Lallana for the trip to St Mary’s, with the midfielder due to undergo a scan after picking up a knock during England’s 2-2 friendly draw with Spain on Tuesday.
Midfield playmaker Philippe Coutinho, meanwhile, has undergone a scan and could be an injury doubt following his return to Britain after featuring for Brazil in World Cup qualifying wins over Argentina and Peru.
Coutinho and Roberto Firmino were flown back by private jet with compatriots from other Premier League clubs as Liverpool shared the cost to ensure they returned quickly.
But the Reds are unlikely to risk Coutinho against the Saints if there is any worry that it could exacerbate any injury concerns.
SOUTHAMPTON ‘RARING TO GO’
“I would say 95 percent is good news, but with Adam we don’t know yet exactly,” Klopp said.
“The Brazilian guys came back on Wednesday night. We tried everything to make it as comfortable as possible to bring them back.”
Defeat at struggling Hull City meant Southampton went into the recent break on the back of two successive league reverses.
Striker Jay Rodriguez says that has given Claude Puel’s side additional motivation ahead of the visit of Klopp’s men.Advertisement

“After the Hull game we were very disappointed and we can’t wait to put it right,” said Rodriguez. “The international break was a long break, but the lads are raring to go again.
“It’s going to be a good battle against their strikers for our defence, but it will also be crucial to make sure we take our chances.”
Puel, the Southampton manager, has been handed a boost with both goalkeeper Fraser Forster and midfielder Pierre-Emile Hojbjerg in contention despite returning early from international duty through injury.
Left-back Ryan Bertrand and forward Dusan Tadic should also be fit, along with right-back Cedric Soares, although striker Shane Long will miss out.
“I think it’s OK for Fraser and Pierre,” said Puel.
“They have some injuries in the last week, but they should be fine. Ryan is OK and Tadic had an injury to his nose, but he spoke with the medical team already and should be fine for Saturday’s game.
“Cedric will come back and Shane Long has come back into the training sessions, but it’s too soon for this game.”