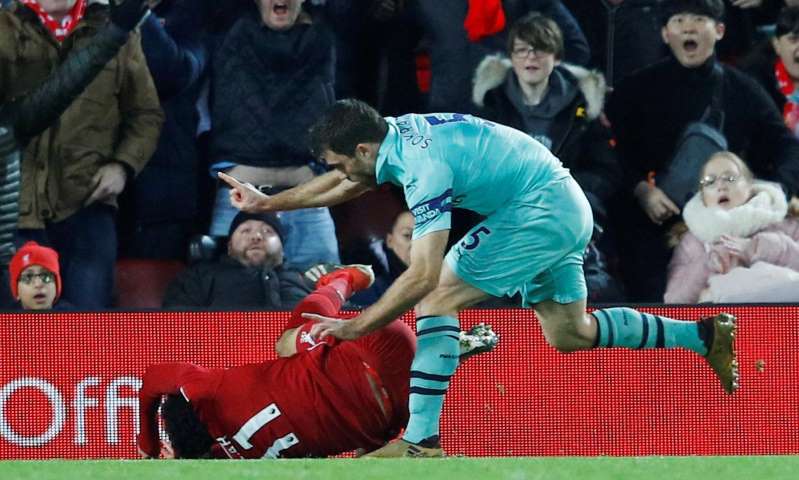 Salah takes a thud under challenge
Spread This News

Jürgen Klopp proved far more defiant than Arsenal’s defence as, rather than revelling in a biggest league win over top-six peers for 16 months and Liverpool’s largest lead in this season’s title race, he rejected suggestions Mohamed Salah is a diver by insisting the striker should not have to bleed to win a penalty.

Liverpool’s top scorer struck from 12 yards after Sokratis Papastathopoulos twice clipped his calves but, after the half-time whistle blew, the Arsenal defender confronted Salah to accuse him of taking a tumble.

Some 90 minutes before Klopp intervened to protect Salah, so did Virgil van Dijk during an altercation in the tunnel. “He went to Mo and was saying he dived,” the Dutchman said.

“He was attacking him a bit but I wanted to say he didn’t dive.” Nevertheless, the reigning footballer of the year risks getting the wrong kind of tag. This was the second time in four days when opponents felt Salah exaggerated contact.

Rafael Benítez bemoaned what he termed a “soft penalty” after Newcastle’s Paul Dummett tugged Salah, while his Burnley counterpart, Sean Dyche, inserted himself into the argument to describe as “bizarre” the FA’s decision not to issue the forward with a retrospective ban for supposedly diving on Boxing Day.

But, on a day when Tottenham’s Harry Kane was cautioned for simulation and after Dejan Lovren earned Liverpool’s third penalty of the week when he was shoved by Sead Kolasinac, Klopp was adamant neither Salah nor his teammates deserve a reputation for diving.

The Liverpool manager does not consume much of the media but is an avid viewer of shows where former referees assess decisions their successors make and he believes they support his case. He explained: “Dermot Gallagher said [after Newcastle], ‘penalty.’ His [Dummett’s] arm was there. Do we need blood for a proper penalty? I think no.

“In that moment, if you don’t touch Mo and he makes the next step and shoots – and we know he’s pretty good at that …,” he mused. “I haven’t seen it back [with Papastathopoulos] and I have no clue about what happened but the ref really was close to it. We don’t have divers and that was not a dive. The other one is not a dive. The ref decides it. In the three and a half years, we have had more penalties not given when they were penalties and you think, ‘hmph, hmph, hmph.’”

If Salah’s character is being impugned, Xherdan Shaqiri expects Liverpool to come under a different kind of attack when they visit Manchester City on Thursday. The champions will host their putative replacements but the midfielder believes Liverpool’s position at the division’s summit will make them a target.

“If you are top of the table, everybody is coming after you and everybody wants to beat you,” the summer signing said. “They’re going to come after us and will try to win, to grab three points.” If the stakes seem bigger than that, Shaqiri denied a Liverpool victory would end City’s defence of their crown. “We don’t go there to take Man City out of the race, we go there for a game,” he said. “Everything can happen this season but it’s a long way to go.”

That measured attitude was reflected elsewhere at Anfield. While Klopp punched the air at the final whistle, it was without his usual exuberance. He was restrained in his rhetoric. “Sport is a season,” he rationalised.

“We really only celebrate things when the season is over. After the game in the dressing room [with] what I say, it didn’t sound like we won the game. Then at the end, ‘… and congratulations by the way, brilliant performance!’”

If Salah had a typical prominence and Roberto Firmino’s first Liverpool hat-trick made him the headline act, it invited questions if Georginio Wijnaldum, arguably Liverpool’s finest performer on the day, would again be overlooked.

“Under your radar,” Klopp said. “He’s an outstanding player. He combines a lot of things that you need. In a one-and-one situation, he can keep the body between the opponent and the ball, then pass the ball. I don’t know how many positions he’s played. He can play all three positions in midfield and that’s really nice.”

Like Shaqiri and Andrew Robertson, Wijnaldum joined Liverpool from a relegated club. Their fortunes have been transformed in an upwardly mobile team. If Wijnaldum, with 25 appearances and 2,224 minutes on the pitch, has been the constant in a midfield furnished with expensive upgrades, other numbers are startling. Liverpool had not trailed at Anfield in the Premier League for 364 days until Ainsley Maitland-Niles scored and even then, they were behind for only three minutes.

Their 2018 yielded 88 points from 37 matches, a return of 2.38 per game that is unrivalled in the club’s history. Salah completed the calendar year with 25 goals at home, Alisson with conceding the same number – five – in his Anfield career for Liverpool as on his solitary visit with Roma.

“We have finished 2018 pretty well,” Van Dijk said. It ranks as an understatement.