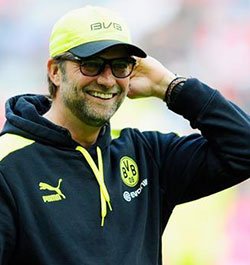 JURGEN Klopp has categorically ruled out a potential switch to Barcelona this summer, claiming he is ‘in love’ with Borussia Dortmund.
The German tactician has been heavily linked with the Camp Nou post for the start of next season, as much-maligned Tata Martino nears the exit door.
Klopp though, has insisted that he wants to stay at the Westfalenstadion, despite interest from Barca.
“No one has to be concerned about that,” he told the club’s official website.
“We’re all a little bit in love with this club and the way things are done here.”Advertisement