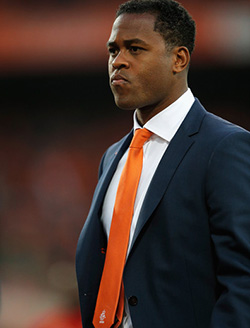 DUTCH legend Patrick Kluivert is on the Ghana Football Association’s (GFA) five-man shortlist to be the new coach.
Ghana have been without a coach since Kwesi Appiah left in September.
The other candidates are ex-Chelsea boss Avram Grant, former Italy midfielder Marco Tardelli, Swiss Michel Pont and Spaniard Juan Ignacio Jimenez.
“Pont, Kluivert and Tardelli will be interviewed in Accra on 17 October, Grant and Jimenez will be interviewed on 18 October,” said the GFA.
Former Ajax and Barcelona striker Kluivert, who scored 40 goals for his country in 79 appearances, left his post as Netherlands assistant coach after the World Cup.
The 38-year-old began his coaching career in 2011 at Dutch side Twente, where he looked after the youth and reserve teams.
A year later he became assistant to Netherlands boss Louis van Gaal and the pair led the team to third place at the 2014 World Cup in Brazil.
Grant has a wealth of management experience, including a four-year spell in charge of his home country Israel and a year as Chelsea coach.
Italian Tardelli is perhaps most famous for his ecstatic goal celebration in the 1982 World Cup final victory over West Germany. He has since coached, among others, Egypt and was also assistant coach of the Republic of Ireland.
Pont and Jimenez are lesser known names globally. Pont has been Switzerland assistant coach, while the most recent role for Jimenez was coach of Spanish side Valladolid.
The GFA also said two coaches, German Bernd Schuster and Argentine Ricardo Gareca, have been named on standby and will be drafted in the event any of the chosen shortlist is not readily available.
Maxwell Konadu is in charge of the Black Stars in a caretaker capacity and will oversee the team for the 2015 Africa Cup of Nations qualifiers double header against Guinea.
They will play at the Syli Nationale on 11 October in Casablanca, Morocco before hosting the return leg four days later.Advertisement