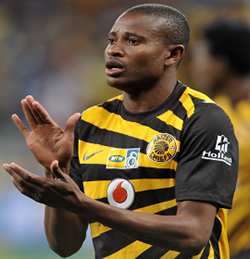 KAIZER Chiefs left back, Jimmy Jambo, has retired from football because of a recurring injury.
In June, it had been reported the Zimbabwean international was set for a pre-season return at Naturena.
But after suffering a horrendous knee injury during the 2012/13 against Bidvest Wits in the Absa Premiership season, the former Gunners defender has now decided not to carry on playing, after
failing to recover.
According to reports from South Africa Jambo’s retirement meant that another foreign player is now allowed to play for Chiefs following his early retirement.
Chiefs football manager, Bobby Motaung, told reporters at press conference, “I can tell you right now that the one foreign space in the team is the one which has been opened by Jimmy Jambo who had to hang up his boots.”
It was thought that Jambo could return to the game after the injury. According to Motaung, he was given a chance to return to the game but he struggled.
“He decided to focus on other things as we tried to give him a chance but he could not handle it,” Motaung said.
Amakhosi also took to their official twitter handle in confirming the news by tweeting, @Kaizer_Chiefs “Jimmy Jambo has decided to hang up his boots because of his injury.”Advertisement