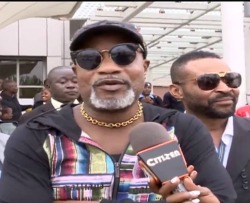 MUSICIAN Koffi Olomide was Tuesday taken into custody in the Democratic Republic of Congo, days after he was deported from Kenya for allegedly kicking one of his dancers at an airport in Nairobi.
A judge is considering whether to charge the star over the incident, which was filmed and went viral.
He was expected to spend the night in detention with investigations expected to continue on Wednesday, a BBC reporter said.
Olomide has denied assault, though he has since apologised for his behaviour.
The Kenyan authorities deported the 60-year-old rumba singer and three of his dancers on Saturday to DR Congo’s capital, Kinshasa, following a public outcry over the incident.
The BBC’s Poly Muzalia in Kinshasa says police officers arrived at the singer’s home early on Tuesday morning and took him into custody.
He was handcuffed, put into a police car and then taken to a court where a judge is considering whether he should be put on trial.
His lawyer, Landry Tanganyi, told the BBC that Olomide, one of Africa’s most popular musicians, should not be detained overnight as he was not a flight risk.
However, Olomide left the courthouse under police escort and will spend the night at the police station, our reporter says.
The Congolese musician has been in similar trouble in the past:
In 2012 he was convicted in DR Congo of assaulting his producer and received a three-month suspended prison sentence. In 2008 he was accused of kicking a cameraman from DR Congo’s private RTGA television station and breaking his camera at a concert in Kinshasa but a reconciliation was later brokeredAdvertisement