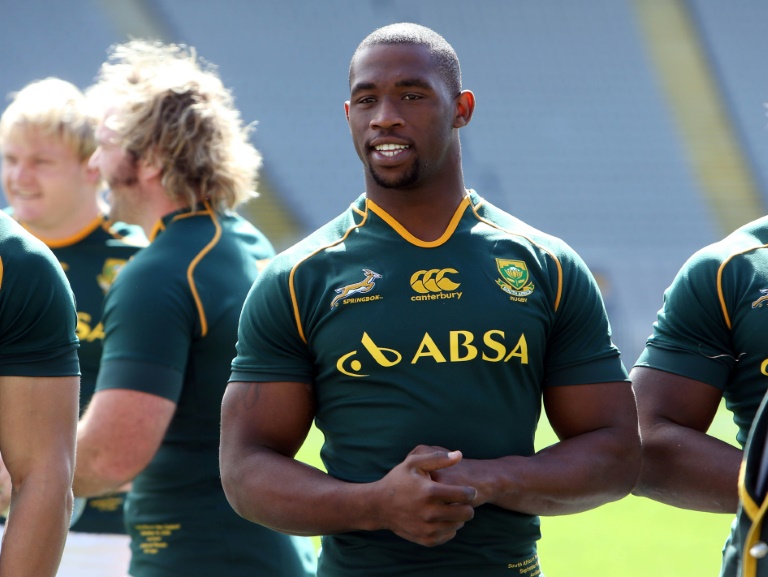 SIYA Kolisi will become the first black Test captain of South Africa when he leads them in a three-Test series against England in June, coach Johan ‘Rassie’ Erasmus announced Monday.

In 2006, Chiliboy Ralepelle became the first black to skipper the South African national team, against a World XV in England, but the match did not have Test status.

Pieter-Steph du Toit will lead South Africa in a one-off Test against Wales in Washington this Saturday before the England series.

Kolisi and many other likely first choices for the England series will remain in South Africa to prepare for a series starting on June 9.

“It is a huge honour to captain the Springboks and Siya and Pieter-Steph are two honest, hard-working men who enjoy the respect of their fellow players,” Erasmus told reporters.

“I believe both of them will do a good job as captains.

“My philosophy is that each player must take responsibility for his position and work extremely hard with one goal in mind — to make the Springboks successful again.”

‘I am all about deeds’

Kolisi recently spoke about captaincy, saying: “I am not someone who gives ‘Braveheart’ speeches. I am all about deeds.

Referring to his patchy recent Super Rugby form, Kolisi said: “I have come to realise that you cannot play well in every match.

“It is something I have had to learn to cope with because as a leader I put myself under huge pressure to perform every weekend.

“I am learning to deal with this personal pressure and the captaincy.”

His selection as skipper is a major breakthrough for South African rugby, still struggling to shake off the belief among many blacks that it remains a ‘white’ sport.

Blacks were barred from representing the country at rugby during apartheid and progress toward a team reflecting the population of the country has been frustratingly slow in recent decades.

Only about 10 percent of South Africans are white, but they occupy more positions than blacks in the national rugby team.

The squad chosen last Saturday for the Wales and England Tests consisted of 24 whites and 19 blacks.

South African Rugby and the government have agreed that 50 percent of the team at the 2019 Rugby World Cup in Japan should be black.

But Erasmus faces the same problem as his predecessors of having to choose blacks from a limited pool.

Two of the four South African teams who played Super Rubby last week had five starters and the others only three.

Willemse stormed off a live Super Rugby show after saying Naas Botha and Nick Mallett, who also coached South Africa, were “undermining” him.