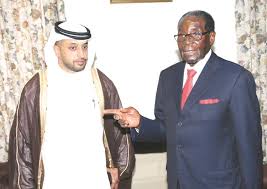 HARARE: Chairman of Kimberley Process Certification Scheme (KPCS), Ahmed Bin Sulayem, who is in the country on a routine visit, on Monday said he expects the diamond industry to have come up with a set of global standards for the pricing of rough diamonds by year-end.
Rough diamond pricing has been a key issue in the industry and Sulayem has focused his attention on facilitating rough diamond valuation forums. After hosting the first forum in Dubai in May this year, another one is scheduled to take place next week, just before the November KP plenary.
Most diamond producing African nations have not benefited from their production because of discrepancies in the prices of rough diamonds, Sulayem added.
“The focus of my team and I has been to have KP this year dedicated to Africa before everything else. That is why we are focusing on the rough diamond valuation — an initiative which nine months ago was seen as too difficult but it has gathered traction we are seeing good number of participation from various players who would want to develop systems that can help the African countries understand the price of the rough diamonds before they leave their country,” said Bin Sulayem.
“I am very confident that we will come to a conclusion, with the support of the KP community we will have something that we can all be proud of by the end of this year.”
However, the UAE — which chairs the KP — has come under the spotlight for its valuation processes. In 2015, the average price of rough diamonds imported into the UAE was $88 per carat whereas the average price of exports was $119 per carat, according to data recently published by the KP.
Bin Sulayem and his team are scheduled visit the Marange diamond fields later on Monday.
The team has toured diamond-producing African nations Angola, Burkina Faso, Ivory Coast, Ghana and the Central African Republic.Advertisement