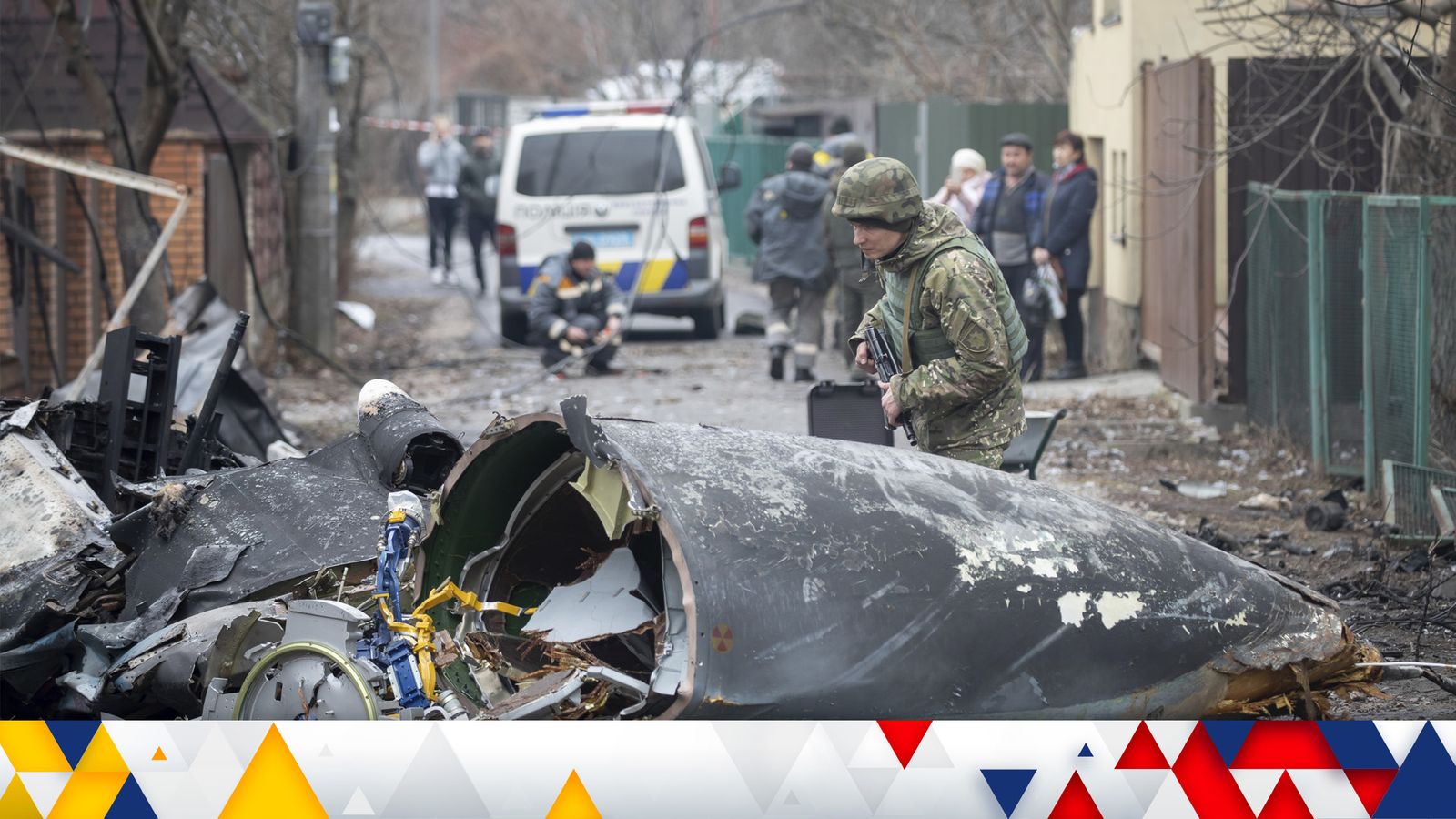 FIERCE fighting has broken out in Kyiv as Russian forces tried to push their way towards the city centre and were met with resistance from the Ukrainian military.

Throughout Friday night, explosions rocked the capital. Artillery fire could be heard in the streets and as dawn broke, a post on the Ukrainian Armed Forces’ Facebook page said “active combat” was taking place in the city.

The Ukrainian military claimed to have repelled one attack by Russian forces on an army base located on a main avenue in the Ukrainian capital. The Russians “attacked one of the military units on Victory Avenue in Kyiv. The attack was repulsed,” Ukraine’s army said on its verified Facebook page, without specifying where exactly the incident took place. There was no comment from the Russian military.

The air force command reported heavy fighting near the airbase at Vasylkiv south-west of the capital, which it said was under attack from Russian paratroopers. The Interfax Ukraine agency said Russian soldiers were trying to capture one of Kyiv’s electricity generating stations.

Oleksiy Danilov, secretary of the national security and defence council, told Ukrainian news site Lb.ua that the army was “in control” of the situation. “We are stopping the horde using all means available. The army servicemen and citizens are in control of Kyiv,” he said.

City authorities had urged residents to fight back against the invading army and prepare molotov cocktails for a citizen uprising if Russian fighters broke through defensive lines. In one district the authorities handed out rifles to any citizen who wanted to fight. The defence ministry opened the army to any Ukrainian citizen and recruitment offices were flooded with volunteers.

Many residents spent Friday night taking cover in shelters and underground stations. In Kyiv, one woman reportedly gave birth in an underground metro station, where she had been sheltering with other residents.

Ukraine’s president, Volodymyr Zelenskiy, had warned Friday night would be a dark one and called on Kyiv’s three million residents to help hold the capital. He vowed to remain in the city and fight as Russian troops advanced.

“Special attention on Kyiv – we cannot lose the capital,” he said.

On Friday, barricades went up around the city as its defenders set up positions on bridges and prepared for an onslaught. More Russian troops converged on the city from three directions.

As the fighting took hold in Kyiv, a refugee crisis was building on Ukraine’s borders. Streams of people – mostly women and children, since Ukrainian men aged 18-60 are forbidden to leave – crossed into Hungary, Poland and Romania, with 15-hour queues reported at border points.

The UN refugee agency head, Filippo Grandi, said on Friday night that “more than 50,000 Ukrainian refugees have fled their country in less than 48 hours” and “many more are moving towards its borders”. Photos showed enormous queues of cars heading for Ukraine’s western borders. On Friday, guards fired warning shots to prevent a stampede at Kyiv’s central station as thousands of people tried to force their way on to evacuation trains.

Elsewhere, the US department of defence confirmed that a Russian “amphibious assault” was launched in Mariupol, a coastal city in south-east Ukraine.

Zelenskiy wrote on Twitter that there had been heavy fighting with deaths at the entrance to the eastern cities of Chernihiv and Melitopol, as well as at Hostomel. “Glory to our defenders, both male and female, glory to Ukraine,” he said, flanked by the prime minister and advisers in a video posted to confirm he was in the capital.

He refused to leave Kyiv, despite western intelligence agencies predicting that he and his top officials could be targeted for assassination as Russia sought to take out Ukraine’s leadership.

“It’s clear the kind of vitriol coming from Russia about the Ukrainian leadership,” one western official said, “so I think we can expect that they would be targets for Russian forces coming into the city.”

On Friday, a spokesperson for the Ukrainian president raised slim hopes that a negotiated settlement was still possible.

“Ukraine was and remains ready to talk about a ceasefire and peace,” spokesperson Sergii Nykyforov said in a social media post. He said Ukraine and Russia would consult in coming hours on a time and place for talks.

The US state department cast doubt on whether Russia had legitimate plans for diplomacy, saying that Russia must stop bombing Ukraine first.

“Now we see Moscow suggesting that diplomacy take place at the barrel of a gun, or as Moscow’s rockets, mortars, artillery target the Ukrainian people,” said Ned Price, US state department spokesperson. “This is not real diplomacy. Those are not the conditions for real diplomacy.”

The chief prosecutor of the international criminal court, Karim Khan, put combatants and commanders on notice that he was monitoring Russia’s invasion of Ukraine and had jurisdiction to investigate and prosecute war crimes and crimes against humanity inside Ukraine. Amnesty accused the Russian military of “indiscriminate attacks” after investigating several incidents, including a missile strike on a hospital building in Vuhledar in eastern Ukraine that killed four civilians and wounded 10 more.

Meanwhile, statements from Vladimir Putin have been marked by more of the extreme rhetoric that has accompanied the invasion. In a televised address, Putin described the government in Kyiv as “terrorists” and “a gang of drug addicts and neo-Nazis”, and urged the Ukrainian army to overthrow its leadership.

Tremors from the invasion are being felt around the region. The Kremlin issued a direct threat to Finland and Sweden, which have been openly contemplating Nato membership as a result of the invasion. “Their accession to Nato can have detrimental consequences … and face military and political consequences,” said Maria Zakharova, a Russian foreign ministry spokeswoman.

Russia was forced to vote alone to veto a resolution deploring its actions at the UN security council on Friday night. As Russia holds a veto, the resolution was not upheld, but the US and its allies scored a small diplomatic victory by persuading China not to vote with Russia, but instead abstain. Eleven member states voted for the resolution.

The EU and the UK have moved to freeze foreign-held assets of Putin and his foreign minister, Sergei Lavrov. The largely symbolic initiative followed appeals for action from Zelenskiy.

The Associated Press reported that the Kremlin accepted Kyiv’s offer to hold talks but it appeared to be an effort to squeeze concessions out of the embattled Zelenskiy instead of a gesture towards a diplomatic solution.

In Russia at least 1 800 people were arrested at anti-war rallies, according to OVD-Info, which monitors arrests at opposition protests. Thousands turned out to protests despite tough anti-demonstration legislation.

High-profile Russians including pop stars, chatshow hosts and newspaper correspondents have gone public with their opposition to the war, despite the professional and personal risks that come with dissent against Vladimir Putin’s regime.