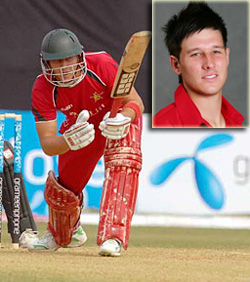 ZIMBABWE bowler Kyle Jarvis has pulled out of the squad preparing for the tour by Pakistan, to take up a county contract.
He told Zimbabwe Cricket authorities that he has received a lucrative offer from Lancashire County Cricket Club in England, and has decided to take it.
The move offers him an opportunity to grow his game by playing alongside the likes of England international James Anderson and former South Africa batsman Ashwell Prince.
Jarvis said that he has not turned his back on international cricket and that given his age, the three-year contract provides a unique opportunity to mature as a player who would then give back more than he has been doing now.
The 24-year-old seamer, whose father Malcolm also played for Zimbabwe and then served as a member of the technical staff for the national team, will leave for the United Kingdom early next month.
Jarvis has been replaced by Shingi Masakadza for the Pakistan series.
His move comes after players boycotted training last week over unpaid match fees and formed a representative council of senior players to force ZC to come to the table. The players were demanding US$5,000 per Test match, $3,000 for an ODI and $1,500 for every T20.
But given that the board is in severe debt, it is unlikely it will be able to match those figures but the players are said to be satisfied with the amounts ZC has offered.
“We wanted to make them aware we were the only international team that were playing without match fees,” one player said. “Now we will be receiving them.”
The issue of disbursements from the board’s share of ICC events, which ZC MD Wilfred Mukondiwa said on Friday morning was the only outstanding article of debate, has still not been resolved.Advertisement