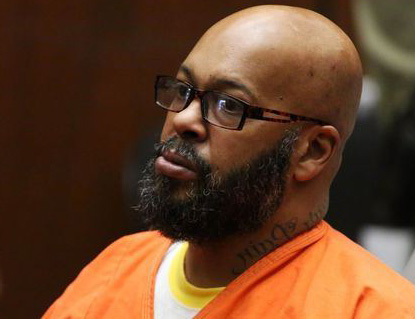 A LOS Angeles judge declined on Thursday to lower the $10 million bail for one-time rap mogul Marion “Suge” Knight, who is held in jail on a murder charge in connection a hit-and-run death.
The ruling was made at a hearing in Los Angeles Superior Court where Knight appeared in an orange jump suit, two weeks after his attorney Matthew Fletcher told reporters he expected Knight would at that time be able to obtain the bail amount and regain his freedom.
Knight, 50, has pleaded not guilty to charges including murder and attempted murder stemming from a hit-and-run at a hamburger stand in the Los Angeles suburb of Compton that followed an argument on the set of a commercial for the film “Straight Outta Compton.”
He is accused of deliberately running over Terry Carter, 55, who later died, and another man with his pickup truck.
Fletcher asked Judge Ronald Coen on Thursday to reduce his client’s bail amount, saying “$10 million is remarkably high,” but Coen declined.
Two weeks earlier, when he ruled that there was enough evidence to proceed with a trial in the case, Coen had reduced Knight’s bail from $25 million to $10 million.
Fletcher had said at the time that he believed two bail companies could “stack” Knight’s bail by providing a combined $10 million.
But on Thursday he told reporters that was not possible and that Knight was still working to try to obtain the bail amount.
“I think we’re going to have really good luck. I think we will be able to make bail,” Fletcher said.
He said Knight is friends with boxer Floyd Mayweather Jr and was hopeful the prize fighter might provide money for his bail. Mayweather will face Manny Pacquiao on Saturday in a mega-bout in Las Vegas.
Coen scheduled Knight’s trial to begin on July 7. If convicted, the co-founder of the influential hip hop label Death Row Records would face a mandatory sentence of 25 years to life in prison.
Later, Carter’s daughter, Nekaya, told reporters outside court she is happy the case is moving forward. “The focus is definitely the victim, my father,” she said.
Knight is charged separately with robbery and making a terroristic threat in connection with the September theft of a camera in Beverly Hills.
He has previous convictions from 1997 on two counts of assault with a deadly weapon, according to court documents.Advertisement