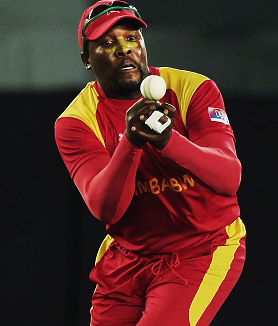 Result-wise, they look ordinary but what the results don’t tell is that they fought in every game and didn’t let their opponents breathe easy
ZIMBABWE were expected to pull off a couple of upsets but despite coming close to doing that on a few occasions, they couldn’t really deal the coup de grace.
They would have been greatly satisfied with their campaign if they had managed to beat a big team but the team threw away important moments, especially against India and Pakistan.
While against India poor catching stood in the way, against Pakistan, a batting failure meant they couldn’t even chase down a modest 236.
The defeat against Ireland made their outing worse. Losing Brendan Taylor to county cricket was another pain they had to deal with.
World Cup performance: Played 6, Won 1, Lost 5. Finished sixth in Group B.
High Point
Zimbabwe’s sweated their way to a four-wicket win against United Arab Emirates, memorable in the sense that it was their only win in Pool B.
However, their high point has to be the match against India where Brendan Taylor smashed 138 and made the Indian bowlers look ordinary, especially R Ashwin and Ravindra Jadeja who until then had bowled beautifully in the tournament.
Zimbabwe eventually lost the game but there is no doubt that they ran India close. The match also was Taylors last match for Zimbabwe and that made it all the more memorable.
Low point
Zimbabwe started their campaign with a 62-run defeat against South Africa. However, it wasn’t a bad outing, considering they gave the Proteas some nervous moments.
But the defeat to Associate team Ireland later in the tournament was definitely their lowest point. Chasing 332 to win, the Zimbabweans fell short by five runs.
What added insult to injury was that Sean Williams, who was on course for a ton, rushed back to the pavilion after getting caught on the boundary by John Mooney. The TV referral showed Mooney had touched the rope in the process of taking the catch but since Williams was already back in the hut, he couldn’t be called back. The match perfectly summed up Zimbabwe’s campaign.
Captaincy verdict
Advertisement

Elton Chigumbura had to pull out after four matches on account of a thigh injury he had picked up against Pakistan, a match where Zimbabwe wasted a golden opportunity as they, chasing 236 to win, fell short by 20 runs.
Great results weren’t expected of Chigumbura’s team in light of their resources but they played well and showed they weren’t there just to make up the numbers.
Credit to Chigumbura and Taylor, who captained in the last two matches, for keeping up the team’s morale in the face of four successive defeats.
Most valuable player

Taylor had announced going into the tournament that it was the last time he will be playing for Zimbabwe and he succeeded in leaving his imprint by scoring 433 runs at an impressive average of 72.16. The fact that Virat Kohli, Shikhar Dhawan and Suresh Raina shook Taylor’s hand on his way to the pavilion manifested how much respect he inspired in his opponents.
Allrounder Williams was another player who staked his claim for the most- valuable-player award, scoring 339 runs at 67.80 with the help of four fifties as well as taking eight wickets.
Major disappointment
As one of the most experienced players in the team, Hamilton Masakadza was always a vital cog but he had a sub-standard tournament.
The 31-year-old started off well with 80 against South Africa but after that waned terribly with scores of 1, 5, 29, 5 and 15.
He was also the one who dropped Suresh Raina early into his innings and the India’s left-hander went on to score his maiden World Cup ton and spoil Taylor’s farewell party.
Verdict

When all is said and done, Zimbabwe managed to impress on a few occasions but a big win eluded them.
Result-wise, they look ordinary but what the results don’t tell is that they fought in every game and didn’t let their opponents breathe easy.
A bit more effort, however, could have made their campaign that much better.