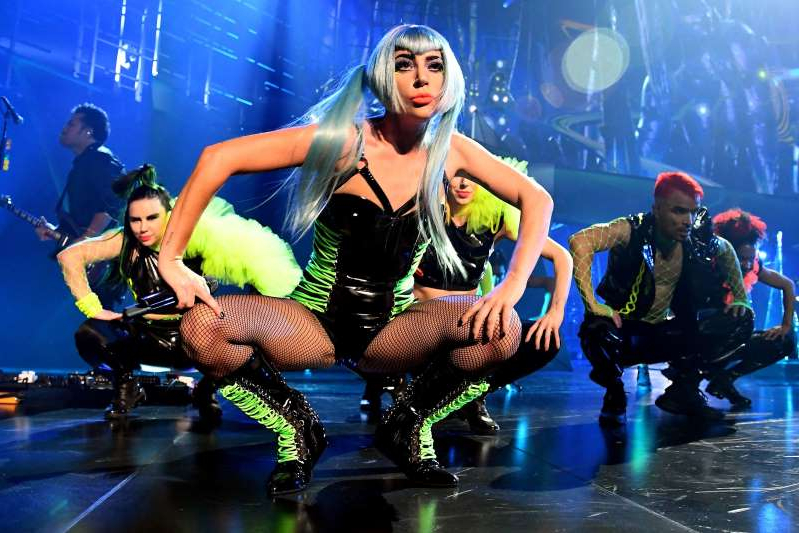 Lady Gaga fell head over heels off into the audience during the latest date of her Las Vegas residency.

The star had invited a fan called Jack to join her on stage and jumped into his arms – but he lost his footing and the pair plummeted to the floor.

“We legitimately thought she was dead,” wrote one audience member on Reddit.

Instead, Gaga returned to play Million Reasons with Jack at her side. “It’s amazing,” she said. “We love each other so much we fell off the damn stage.”

“We fell into each other’s arms. We’re like Jack and Rose from Titanic.

“I suppose we should have some tea after that.”

Fans were concerned for Gaga’s wellbeing as she lives with fibromyalgia, a long-term condition that causes pain all over the body and can also lead to increased sensitivity to pain, fatigue, muscle stiffness, memory problems and sleeping difficulties. 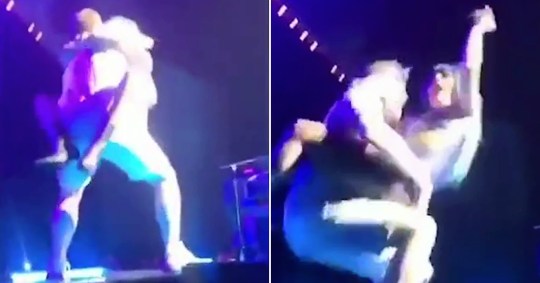 Lady Gaga, on stage, with legs clipping the fan’s waist

In 2013, she had to cancel her Born This Way tour after fracturing her hip.

But the singer shrugged off Thursday night’s fall, calming the audience as security guards helped her to her feet.

“Everything’s OK,” she said. “The only thing that’s not OK is we need some stairs for the damn stage so I can get back up.”

The star also consoled Jack, who was in tears after the accident.

“Don’t worry, everything’s fine. It’s not your fault,” she said, adding: “Could you promise me something? Could you forgive yourself right now for what just happened?”

“She brought him up on stage and asked everyone on the internet to be nice to him,” observed Reddit user UltimaterializerX.

“Poor guy was crying most of the time until she cheered him up.”

Later in the show, Gaga proved the fall had caused no permanent damage by performing an intricate, athletic routine to her signature song, Bad Romance.

She later posted a photograph on Instagram of herself toughing it out in a bath of ice, as part of her post-show routine.