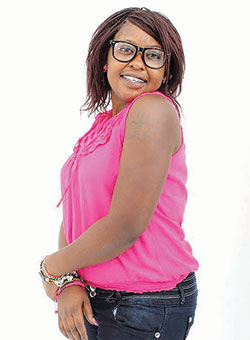 CONTROVERSIAL Zimdancehall chanter and loose cannon Sandra Gazi, popularly known as Lady Squanda, has finally found her biological father and visited the family rural home for the first retracing steps to her place of origin.
Having been orphaned by the death of her mother and raised by her grandmother Eunice Tomana in the sprawling township of Chitungwiza, Lady Squanda exhibits all the classic trademark stereotype signs of a child raised by a doting nan.
Wayward behaviour, the brusque gritty township lingo, a loose cannon; in fact she has even been called the Lindsay Lohan equivalent of the local entertainment scene.
It doesn’t help that she has in recent months faked her death, confessed to smoking marijuana, attacked her ex-boyfriend’s new lover and called her ex-boyfriend DJ Staera gay after being left cold in the sheets.
Now, finally, she has found her father who hosted her in a lavish family braai in Mutoko where he lives at the traditional rural home. And maybe, finally, a father figure will teach this old dog new tricks and make her a lot less rough around the edges as she already is.
“We had her here (in Mutoko) and held a braai with her father,” said one of the people who planned the party who however preferred anonymity.
“They had finally re-united earlier in Harare and had made plans that she make her first visit to her roots and she finally came here. The rural home is just along the road down to Nyamapanda near the road to Mutoko Ruins.
“The father is obviously excited but not ready to be identified in the press for obvious reasons that his daughter has a pretty colourful history with the press and that may divert focus from an otherwise happy family reunion.”
And he may have to hit the ground running in teaching her manners.
Squanda was the only performer booed at Hifa this year after singing words that even the liberal dancehall crowd found distasteful after saying “ndakarwadziwa sedh*dh* remaguava,” in apparent reference to constipation which was a step too far even for that crowd.
Lady Squanda confirmed from her camp that she had gone ‘home’ to Mutoko but would comment no further save for the fact that she is happy with the warm family reunion.
It remains to be seen whether finally having a father will tone down the grizzly bear voiced unpredictable queen of Zimdancehall.Advertisement