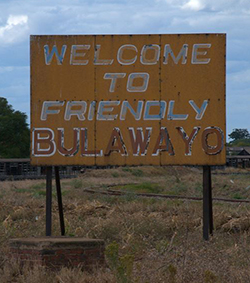 In Bulawayo, this week began with a severe out of season windy and cold Monday replete with dark, none-rain-bearing clouds reminiscent of the misery of cold dreary winter days. I was reminded of Charles Dickens’ Bleak House, from my days at Mzilikazi High School.
This unusual weather extremity was as an unnatural and ironic a phenomenon as witnessing later in the week, my Mukanya, Saviour Kasukuwere, himself recently accused by his boss Robert Mugabe of corruption, addressing a press conference in the city pretending to be a convert of the values of devolution while simultaneously literally raping devolution by announcing the suspension of Bulawayo City Deputy Mayor Gift Banda and councilors Charles Moyo, James Sithole, Mzama Dube and Reuben Matengu for behavior incompatible with elective community leadership, or more poignantly for having been found by a committee which Kasukuwere had appointed to be corrupt.
As I watched and listened to Kasukuwere I was reminded of the often quoted words of Friedrick Nietzsche that; ‘He who fights with monsters should be careful lest he thereby become a monster. And if thou gaze long into an abyss, the abyss will also gaze into thee.’ My mind was cast back to the days of the beginning of the birth of the united MDC way back in 1999. I recalled that fateful weekend at the Zimbabwe Women’s Bureau in Hillside, Harare, the venue of the First Working People’s Convention, hosted by the ZCTU and attended by virtually all of civil society.
I recalled us unanimously adopting the Working People’s Agenda for Change and Ben Hlatshwayo, now Justice Hlatshwayo, then a colleague at the Faculty of Law, University of Zimbabwe, standing up to make the point that it was pointless to present the Agenda for Change to the ZANU PF government as its tenets and principles were anathema to ZANU PF and could never be implemented by ZANU PF. He received a round of applause and within a few minutes we had debated and agreed on the need for a new political party that would be faithful to the values and principles of the Working People’s Agenda for Change. There was born the idea of the MDC with delegates rising to sing and dance to revolutionary songs with the adoption of that resolution.
The mood was enthusiastic, optimistic, idealistic (with hindsight unrealistic). We were the new generation that would take on the monster and slay it within a few months and institute a people’s government committed to social democratic values of justice, fairness, equality, open democracy in which government is accountable to the people through devolution of power, a just society in which the weak and poor are assured of a decent standard of living and equitable and secure access to social services in the fields of health and education; fair and equitable access to and distribution of land; unconditional respect for fundamental human rights; the eradication of all forms of discrimination including those based on gender, sex, ethnicity, religion, place of origin, etc; respect for cultural diversity within a united society built on the principle of just and fair national integration and the eradication of all forms of corruption.Advertisement

I recall that Sunday afternoon the overwhelming sense that I felt that it was our generational mandate to bring down the evil ZANU PF government democratically through the power of the people’s vote and thereafter build a just, fair and prosperous Zimbabwe as I drove home to the sound and lyrics of Sam Cooke’s timeless song, ‘Change is Gonna Come’.
This past week listening to Kasukuwere, one of the baddest you can ever get in ZANU PF politics, chastise us in the democratic movement for corruption in running the affairs of Bulawayo through a 29-person council only 5 of whom were found to be untainted by allegations of corruption, made me feel very, very sad as to how far we have strayed from the things we committed ourselves to that Sunday afternoon.
Of course Gift Banda and the bulk of the councilors who stand so accused were not there that day, nor indeed were they even there in the MDC by the time of the split. But still they have been put forward as the representatives of the democratic movement which is supposed to demonstrate through both words and deeds that we are as different from ZANU PF as day is different from night.
There could be no greater irony than members of the democratic movement bound by the Working People’s Agenda for Change which demanded that we eradicate all forms of corruption, standing accused of provable corruption by a representative of a party founded on corruption. It should never have come to this where there is an appearance of a moral equivalence with ZANU PF. The difference with ZANU PF should have remained as that between day and night.
Reading the report on the goings on at City Hall, one cannot help but feel white hot rage. I kept having the sense that I am in a bad dream and will wake up to great relief. We cannot afford to have ‘mafia gangs’ disguised as councilors doing irregular issuing of tenders, corrupt land deals, nepotism and looting of council property for personal gain.
It is incomprehensible that people elected on a democratic anti-corruption platform could do the things which are said to have been done. Bulawayo has since 2000 been afflicted by the scourge of de industrialization as a result of the governance incompetence of ZANU PF and has a housing backlog exceeding 100 000. How is it possible that persons elected by some of these houseless residents could loot as if there was no tomorrow?
I know that in taking this drastic action, Kasukuwere claims stealthily maneuvers under the guise of both the national Constitution and related local government laws – conveniently masking a known fact that the ruling party has a history of bullying opposition-controlled local authorities. Moreover, it is in the public domain that Zimbabwe is in a state of national economic comatose ONLY because Kasukuwere’s boss is himself a treasure trove of galactic incompetence.
I predict that the man is angling towards setting up a highly partisan commission to act as a funnel for political exploitation of Bulawayo’s resources. Our city boasts an inimitable tradition of fending off the ruling party’s diabolic and predatory advances, so one can assume that this is another of many ways that ZANU PF can exert their parasitic influence prior to the 2018 elections. Our main worry as citizens, is the medium to long-term impact of this arbitrary action, because history is replete with examples of cities and civilisations that disappeared due to bad management.

Kasukuwere is neither a lawyer nor a town planner, so he lacks the intellectual depth to gauge the devastating economic, social and political impact of his primitive actions. The north African city of Heracleion is known to have been a prosperous city, like most Aztec cities of South America, that disappeared. Even in Zimbabwe, there is a possibility that local governance incompetence will subject cities and towns like Chitungwiza, Redcliff and Chinhoyi to ‘disappearance’ acts.
Kasukuwere is a ZANU PF blunt instrument deployed to inflict his version of proverbial justice on towns and cities that do not owe their political existence to ZANU PF. Capturing these cities more than one and half years before crucial elections is a recipe for exploiting the associated infrastructures for the benefit of his party. He cannot, even if he attempted, masquerade as a corporate governance fundi, let alone constitutional expert. And yet to dismiss his intentions as ‘public good’ ranks as an award-winning accolade of stupidity.
Unfortunately, in his wrongness, there is a streak of better-than-average judgement. As a party, my team has always elevated the virtues of accountability through a devolved local government system that gives provincial and municipal administration autonomy because of participatory governance. Through effective devolution as promoted by MDC in Chapter 14 of Zimbabwe’s new constitution, our party shall encourage diverse stakeholder participation on major decisions while breaking the previously resented ‘walls’ between public leaders and citizens. This is only possible because local communities want to participate in effective monitoring through an enabling environment free of ZANU PF type intimidation and MDC-T type corruption.
No town or city is too big to die. When MDC stalks the flames of devolution, we are clear on the benefits, yet ZANU PF will push for central authoritarian control as a means of subsidizing their national political agenda. Cities die because large groups of sensible citizens – especially business – move to places and countries that respect and support their investments. I do not think for once that all dead cities were a result of Assyrian/Babylonian-type military annihilations. Cities like London were once burnt to the ground in previous centuries but now thrive. Even as late as 1940s, most German cities were pounded to pulp by allied forces but today they boast the best metropolitan centres in Europe.
My message this week is that as the nation moves towards the 2018 harmonised elections, we have learnt a tough lesson that our philosophy of devolution must not be a target for primitive ridicule but an alternative to breathe life back into an otherwise dying city devastated by the award-winning failures of the ZANU PF government. The democratic movement must never be seen to be adding to the woes of Bulawayo and feeding on the carcass of our beloved city. Lafa elihle.