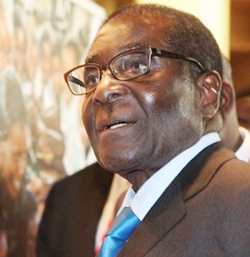 I HAVE written several articles that have addressed Zimbabwean human rights and rule of law, as well as South African foreign policy. I now turn my attention to Zimbabwean legal constitutional history and in particular “The Declaration of Rights’ clause that says – Zimbabwean land redistribution programme had to wait for ten years. That clause was greatly debated and the nationalists only agreed to sign the Accords after assurances from then US President, Jimmy Carter; and so the US joined Britain by default – in agreeing to also help fund an equitable land redistribution program.
I am not Mugabe’s lawyer, neither am I Britain’s’. But, for an effective peace process in Zimbabwe, this piece of the puzzle has to be addressed – land redistribution, as part of that nation’s transitional justice.
Zimbabwe is a small country, but equally a country of tremendous potential if allowed to grow unencumbered. Its greatest asset is its land, capable of feeding the whole of Africa; and its people. My mother who was born in Zimbabwe always reminded me that Zimbabwe was the bread and South Africa – the wine; both are needed for a solid Shabbat.
In 1979, the Lancaster House Accords signed by Lord Carrington agreed to an equitable compensation in the distribution of farmland. Verbal agreements supplemented the written records; the written accord is an incomplete document. The minutes and session discussions are also incorporated into the final Accords if the parties so intended.
At present, the British government has stated that it’s unwilling to meet those promises for compensation. From Tony Blair’s government to Cameroon, the UK government is unwilling to move forward on land compensation unless Mugabe exits. Human rights, I am beginning to concede, is not the only pressing issue: international law and agreements will also play a role in Zimbabwe’s political growth.
For starters during the Rhodesian bush war the Rhodesian armed forces engaged in racist and systemic human rights violations; labelled as ant-communist in nature. Mugabe was knighted by Britain in the past, at a time some argue he was involved in human rights violations – how a person earns a knighthood in this context is a million dollar question: Sir Robert Mugabe.
As for land ownership, the guerrilla fighters argued that since The Creator had put them on the land without white people, there was by Natural Law a right for self-rule, and this was inalienable to the African. The thing speaks for itself – res ipsa loquitur.Advertisement