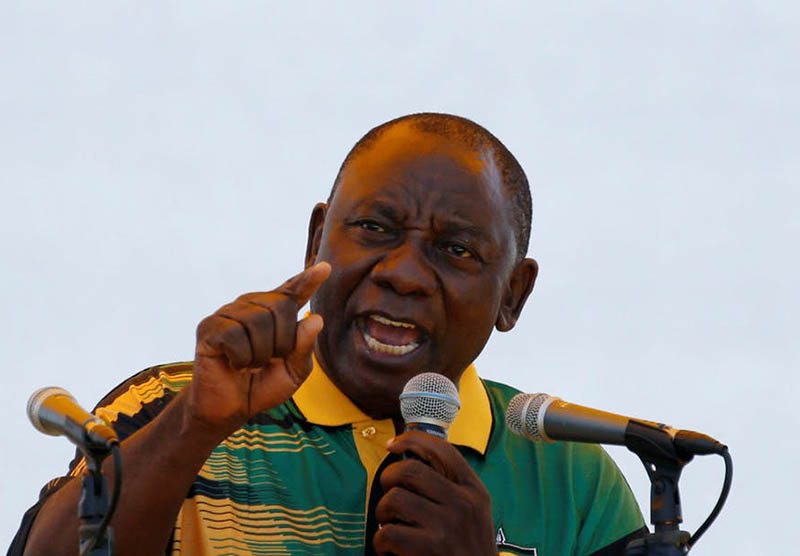 Trump last week, in a tweet, said the US was watching events in Zimbabwe’s southern neighbour.

“I have asked Secretary of State @SecPompeo to closely study the South Africa land and farm seizures and expropriations and the large scale killing of farmers. ‘South African Government is now seizing land from white farmers’,” Trump said.

The response from Ramaphosa was swift and savage.

“This issue of the land; this issue that Donald Trump fears so much,” said the South African leader.

“I don’t know what Donald Trump with South African land because he has never been here. He must keep his America and we will keep our South Africa, that’s what he must do.

“South Africa is our land. South Africa belongs to all the people who live here. It does not belong to Donald Trump. He can keep his America.”

Ramaphosa did not end there, bringing in the issue of racism and slavery into the mix.

“He (Trump) is even worse. When I meet him, I will tell him that ‘you Donald Trump you are even worse because your forbearers came to America they found indigenous Americans, they wiped them out.

“We are living as a nation, black and white. We are going to find solutions for our land question. Donald Trump must leave us alone.

He added; “As far as I can recall, Donald Trump was not around the negotiating table when were negotiated the end of apartheid.

“So, stick around there in the White House we will do our business here and we will find solutions to our problems.

“So, stay out of our issues and we will not get involved in your issues in America. You have your problems. Leave us alone.”

At the height of Zimbabwe’s chaotic land expropriation exercise at the turn of the century, Mugabe told then British Premier Tony Blair off, arguing the program was non-negotiable.

“We have fought for our land, we have fought for our sovereignty, small as we are we have won our independence and we are prepared to shed our blood … So, Blair keep your England, and let me keep my Zimbabwe,” Mugabe told a stunned Blair at the 2002 Earth Summit, ironically in South Africa.