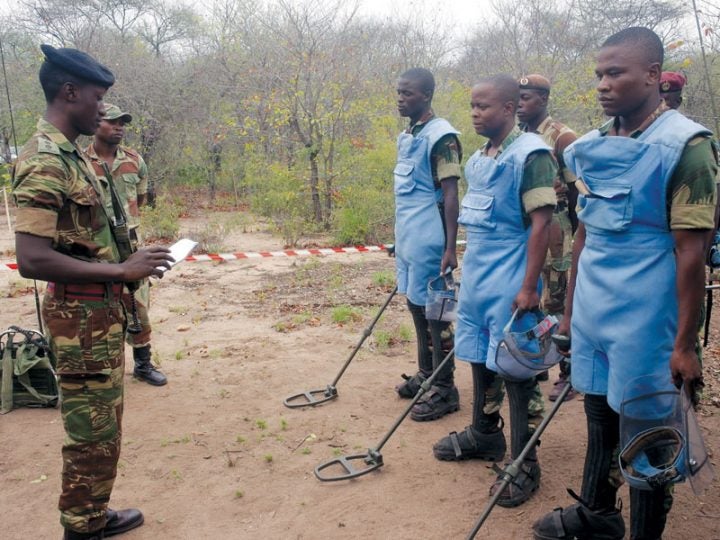 Land mine clearing is a dangerous vocation
Spread This News

HUNDREDS of primary school going children at Kaitano Primary School in Mudzi, Mashonaland East province are still at risk of stepping on deadly minefields on their way to and from school 40 years after they were planted.

The headmaster of Kaitano Primary School, Pedzai Mafunga said the lives of 620 pupils were at risk as the school was surrounded by two minefields, which the pupils and teachers have to pass through every day to get to class.  Mafunga lost a leg to a landmine in 2011.

“The landmines are destroying human life.  We have to guard our children when they are playing,” Mafunga, who lives in the nearby village of Musanzikwa, said.

The headmaster said villagers were also affected as they had to take their cattle to the borehole to drink.  The borehole is also located in a minefield.

“Families are desperate to farm their land and feed hungry mouths. But the best land is cut off by the landmines,” said Mafunga.

“We are locked out because of the minefields.  It feels like we are in prison.  If one day the mines are cleared, I will be very, very happy.  I think I would clap my hands forever,” one elderly villager said.

During the liberation war for Zimbabwe’s independence, the Rhodesian Forces planted landmines along most border points into Mozambique or Zambia to stop freedom fighters from entering Zimbabwe or to deter young potential freedom fighters from joining the armed struggle in the two neighbouring countries.

As a result, an international aid organisation, HALO Trust has launched an appeal “Breaking Boundaries”, to assist thousands of villagers in Mudzi, which is along the Zimbabwe-Mozambique border.

“What would you do if you were trapped in a one-mile radius? Your children’s school, your work or doctor impossible to reach without crossing a deadly minefield,” Halo Trust said in its appeal.

“We are launching our ‘Breaking Boundaries’ appeal to clear the minefields that threaten thousands of villagers in north east Zimbabwe. You can destroy the landmines and break boundaries so that the people in villages like Musanzikwa can thrive, not just survive,” it added.

According to the organisation, dozens of villages in Zimbabwe are still surrounded by minefields.

“Children walk to school through them. Cows graze amongst them. In villages like Musanzikwa there is no choice. People go hungry because farmland and water are cut off by landmines.  You can help us clear landmines in Zimbabwe to create a safe path for school children and a secure future for their families. Clear a landmine and break the deadly boundaries for good,” HALO Trust said.

With the matched funding from the UK government, HALO will clear landmines around the village of Musanzikwa and other neighbouring villages in Zimbabwe, enabling local people to farm safely, send their children to school and reach their local markets.

It said all donations will support the project in Zimbabwe.