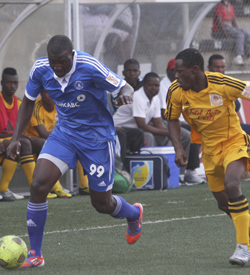 SIDNEY Linyama’s last gasp winner for Dynamos at Rufaro on Thursday piled new pressure on relegation-threatened Motor Action.
The former Chicken Inn midfielder was introduced as a substitute in the second half, replacing Agustine Mbara, and soon repaid the faith shown in him by Kalisto Pasuwa as his goal sent Dynamos second in the Premier League, leapfrogging Highlanders who lost 1-0 to Black Mambas across town.
Motor Action, fielding a youthful side mainly made up of players from the Aces Youth Academy, had appeared on course to steal a point as the match entered injury time but a free kick awarded to Dynamos would change the course of the game.
Wisdom Mutasa, the son of Dynamos legend, Lloyd, was penalised for a pull on Tawanda Muparati’s shirt. Dynamos goalkeeper George Chigova took the free kick, sending the ball into a congested Motor Action penalty area and Linyama found space to nod in the winner.
Dynamos fielded former Moroka Swallows defender Oscar Machapa and former FC Platinum winger Benjamin Marere.

Motor Action had the first clear sight of goal after six minutes but midfielder Clive Sibanda shot over the bar.
Still Dynamos dominated and on 20 minutes Tawanda Muparati set up Patrick Khumbula but the Dynamos striker directed his effort wide.
Russell Madamombe, easily the outstanding player in the match, then set up Thomas Magorimbo but his low effort fizzed just wide of the target.
In the second half, Motor Action matched their more experienced opponents all over the pitch and it took a brilliant save by Chigova to deny Ibabali Yves following a slick passing move involving Walter Musona and Ngonidzashe Maviri.
But as the final whistle approached, Dynamos stamped their authority with Augustine Mbara, Madamombe and Washington Pakamisa all coming close.
Pasuwa then introduced Linyama on 65 minutes and later Farai Mupasiri for the ineffective Khumbula. Motor Action coach Joey Antipas also made some changes, bringing on Scola Hadebe for Mukahlera Tafadzwanashe on 74 minutes.
But, it was Pasuwa’s substitution which made the difference as Dynamos continued to be a serious threat.
As the much needed goal became stubbornly elusive, a plastic bottle containing some substance believed to be urine was thrown into the Motor Action goal from the stands. Soon after the incident, Magorimbo had a long range effort crashing against the cross bar.Advertisement

But Linyama would not be denied a few minutes later with the all-important winner that keeps the champions within touching distance of leaders Harare City who could only draw with Tripple B 0-0 on Wednesday.
Pasuwa was a relieved man to go away with the full points but also had some nice words for his opponents.
“I was worried by this break but I’m happy the players responded well. Motor Action congested their midfield and made it difficult for us to penetrate. They are a young team and they played well. I knew it was going to be difficult despite that they are at the bottom of the league table,” said Pasuwa.
His opposite number, Antipas, was satisfied with the performance by his young side.
“They played well but they lacked concentration in the end. They couldn’t deal with the high ball. It’s down to inexperience but I’m pleased with their showing. With 11 games left, I’m confident we will be able to survive relegation. We now have to go back to the drawing board,” said Antipas.