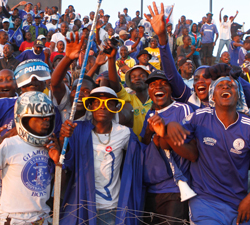 Shabanie Mine 1-1 Dynamos
DYNAMOS’ slow start to the defence of their Premier League title continued on Wednesday after they were held by 10-man Shabanie Mine in Zvishavane.
After identical 1-1 draws against Black Mambas and Chicken Inn, it was a case of déjà vu for Callisto Pasuwa’s men who saw Shabanie steal a point seven minutes from time through Victor Kunyarinwe’s free-kick.
After crashing out of the Champions League on Sunday, Pasuwa was anxious to see the champions kick on in the domestic league.
But with just four goals in five matches in all competitions this season, the Dynamos boss will now be fearing that their lack of firepower upfront following the off-season departures of strikers Rodreck Mutuma, Simba Sithole and midfielder Denver Mukamba could see them fall behind their domestic title rivals.
That lack of threat in front of goal was evident in the first half in which Shabanie also defended stoically.
Patrick Khumbula then threw the Harare side a lifeline on the hour mark as he controlled a long ball before easing past Brighton Tuwaya and rifling past the despairing gloves of Roy Mazingi.
Shabanie were the reduced to 10 men minutes later as centre back Smart Muchabaiwa, already on a caution, was sent off for dissent.
But instead of lifting the visitors, the red card appeared to galvanise the asbestos miners who dug deep and forced two brilliant saves from Artwell Mukandi as they peppered the Dynamos goal in search of parity.
The longer the match went on with Dynamos’ advantage still the single goal, the more the clash turned into a tense affair with Shabanie moving the ball quickly from defence to attack.
Kunyarimwe then struck a dagger into the heart of the Dynamos recovery effort with a sweetly-struck free-kick which leaves the champions trailing rivals FC Platinum and Highlanders by six points.Advertisement