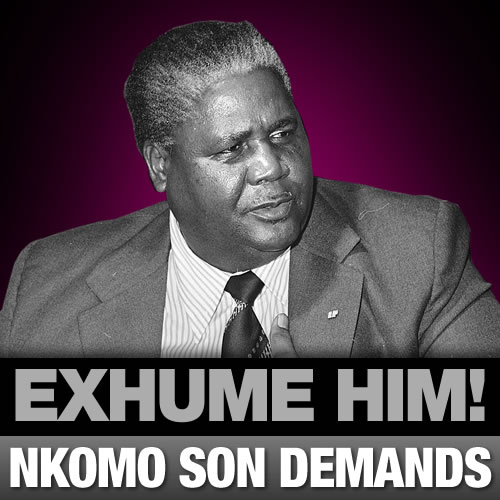 He wants the iconic late nationalist’s remains to be reburied at his rural home in Kezi, Matebeleland South province.

Nkomo died on July 1, 1999 after a long battle with prostate cancer and was buried at the national shrine.

Speaking at Dumiso Dabengwa’s 3rd anniversary commemorations in Bulawayo Monday, Sibangilizwe claimed that before his death, his father had told him he resented the national shrine burials.

Dabengwa died in Nairobi, Kenya on May 23 in 2019 en-route to Zimbabwe after undergoing a month-long treatment in India. He was declared a national hero and buried at his family grave yard in Ntabazinduna.

“I am one of those people that was tasked by my father to resist his burial at the national heroes acre. He made it very clear that he did not want to be buried at any heroes acre,” Sibangilizwe said.

“He said he wanted to lie beside his parents. This is a task that I was given and it lives with me day in day out. I was not able, in 1999, to fulfill his wishes because I was in the minority against the decision to bury him in Harare. However, as an individual, I feel I still have that task, to fulfil my father’s request,” he said.

The Zapu leader said a lot of Zimbabweans and party members are also not happy that Nkomo was buried at the heroes acre.

“It is important for the nation to know that wherever we are going these days on our meet the people outreach programmes, people are asking one question: What are we doing about Joshua Nkomo’s grave in Harare? It is not up to me to say I am going to exhume him. Yes, I can apply to the ministry of home affairs, but it’s up to the people to emphasise that they want him removed from that place. I cannot do it alone. It is the people who make sure that they don’t want Joshua Nkomo resting with liars and thieves,” he said.

Late President Robert Mugabe was well known for forcing burials at the national shrine, even when family members indicated the deceased’s wishes against it.

Surprisingly, Mugabe was not buried at the shrine. His remains are enterred at his Zvimba home despite calls for their exhumation and reburial at the heroes acre.

The function was attended by ZAPU’s top leadership and members of the Dabengwa family.