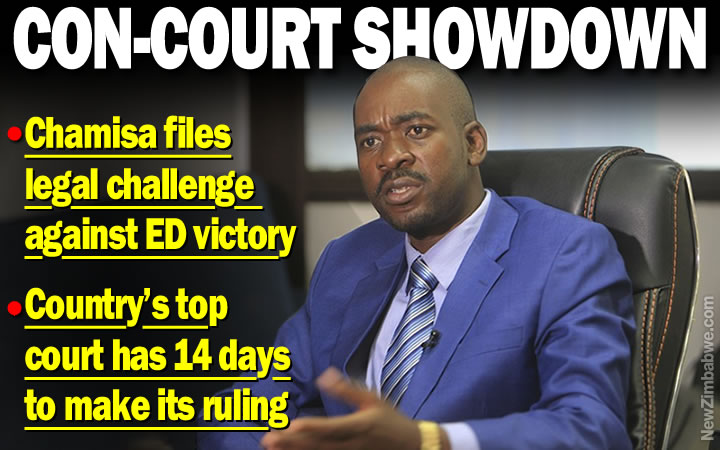 THE MDC Alliance lodged a court bid Friday to overturn the results of presidential elections that it alleges were rigged to ensure victory for Robert Mugabe’s successor, Emmerson Mnangagwa.

The opposition coalition has accused the ruling ZANU-PF party and the election commission of ballot fraud in the July 30 vote, Zimbabwe’s first poll since the ousting of Mugabe in November.

Mnangagwa’s inauguration – planned for Sunday – was immediately postponed until the court makes its ruling, which is due within 14 days.

“We will rest when this country is liberated,” Jameson Timba, a senior member of the MDC, told journalists outside the Constitutional Court after party lawyers arrived accompanied by plastic boxes full of paperwork.

Party leader Nelson Chamisa tweeted: “Our legal team successfully filed our court papers. We have a good case and cause.”

Mnangagwa, who is seeking to reverse Zimbabwe’s economic isolation and attract desperately-needed foreign investment, had vowed the elections would be free and fair, and would turn a page on Mugabe’s repressive 37-year rule.

International monitors largely praised the conduct of the election itself, although EU observers said that Mnangagwa, a former long-time Mugabe ally, benefitted from an “un-level playing field” and some voter intimidation.

Mnangagwa narrowly won the presidential race with 50.8 percent of the vote — just enough to avoid a run-off against the MDC’s Nelson Chamisa, who scored 44.3 percent.

The MDC arrived at the court less than an hour before it closed on Friday, the last day that the petition could be lodged.

Analysts say that the legal challenge has little chance of success given the courts’ historic tilt towards ZANU-PF, which has ruled since independence from British colonial rule in 1980.

But the delay to Mnangagwa’s inauguration drew further attention to concerns over the election’s credibility.

Judges have 14 days to rule on the case, and could declare a winner, call another election, or order a run-off or recount, according to the Veritas legal group.

The inauguration should take place within 48 hours of the court’s ruling, it added.

“We are seeking a declaration to the effect that the presidential election was not properly conducted.”

The aftermath of the election has been marred by allegations of a crackdown on opposition members, including beatings and arrests.

Also on Friday, lawyers for senior opposition figure Tendai Biti asked judges to throw out charges against him over the protests against alleged election fraud, in a case raising further international concern about the new government.

Diplomats and election observers were present at the hearing in Harare after Biti fled to Zambia but was handed back to Zimbabwean police despite claiming asylum.

He faces charges of inciting the protests last week by proclaiming victory for the opposition.

“Zimbabwe faces a terrible threat from a group of people that has no respect for the law,” Biti, who was granted bail Thursday, told the court before his case was adjourned until next week.

Mnangagwa wrote on Twitter that Biti was released after he intervened personally in the case.

The Zimbabwe Human Rights Commission, established under the 2013 constitution, on Friday released a damning report into the post-election crackdown.

It said it had received numerous complaints of “hunting down” and intimidation, often by men in military uniform, of voters thought to have backed the opposition.

The EU, US, Canadian and Australian missions to Zimbabwe urged authorities to guarantee Biti’s safety and human rights, and said they were “deeply disturbed” by reports that opposition supporters were being targeted by the Zimbabwean security forces.