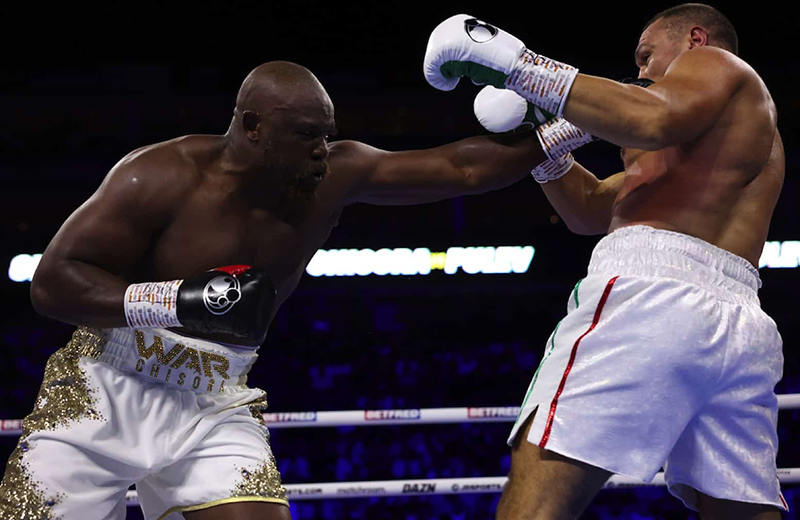 The 38-year-old veteran – an underdog heading into the fight – went toe-to-toe with Bulgarian Pulev, 41, with both men landing throughout the contest.

Chisora gains revenge for his 2016 split decision defeat by Pulev.

It may not have been the most technical bout of all time, but Pulev-Chisora was a fight in which two veterans of the heavyweight division relentlessly traded punches for almost the entirety of the contest.

Chisora promised he would stick it on Pulev from the first bell and, in front of a raucous crowd of 7,000, was the aggressor straight away, forcing his opponent on to the back foot.

Pulev’s clinching prevented Chisora from finding leverage in the opening two rounds, but the Briton’s work to the body was particularly impressive

Chisora bulldozed forward with little regard for his own defence or safety, but Pulev began to find success with his jab and landed the cleaner punches as his opponent lost momentum in rounds three to five.

It was a scrappy affair at times, with both fighters leading with their heads, getting tangled up on the inside and warned by the referee on several occasions in the middle rounds.

The bout really picked up in the second half, however.

In the seventh round, Chisora unleashed his trademark overhand lefts and rights. Not everything landed cleanly, but each wild swing spurred the crowd into action, with Pulev cut above the right eye.

A Pulev right uppercut in the eight, teed up by a straight left, wobbled Chisora. In the ninth, however, it was Pulev holding on as the Briton came back fighting.

Pulev landed a right after the bell in round 10, Chisora reciprocated with a punch of his own as the referee – not for the first time – intervened.

Both boxers may have felt the fight was still there for the taking in the final round, and it Chisora who landed the more telling blows.