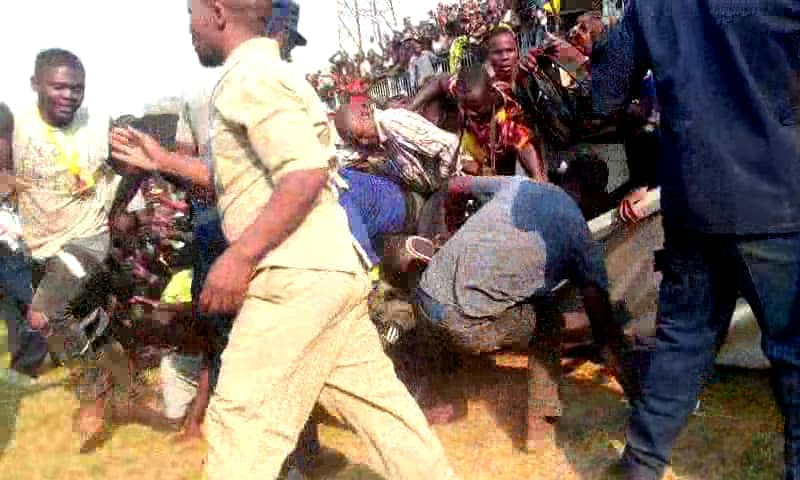 The incident happened when the body of the country’s founding leader was taken to the Harare football stadium to allow ordinary Zimbabweans to bid farewell to Mugabe.

Police formed a barricade to allow mourners to view the body but they found themselves overwhelmed by hundreds that poured out of the terraces and spilled onto the pitch to view the body.

Only Mugabe’s relatives and a few people who had managed to gain entry into the football pitch had initially been allowed to view the body.

Mugabe’s widow, Grace and the couple’s three children were first to view his body and were followed by close relatives and government officials who were present.

Mourners who were seated patiently on the terraces then started demanding their chance to see the body.

They were chanting, “Gushungo, Gushungo” before pouring onto the pitch in the process, overpowering the police.

A number of people got injured during the melee which lasted about 15 minutes.

Anti-riot police were called in to contain the situation.

Grace and her three children remained seated in the VIP tent watching the chaos.

Police had to form a barricade, holding hands after ordering mourners to sit down awaiting their turn to view Mugabe’s body.

Finally, everyone who wanted to pay the last respects to Mugabe got a chance with mourners coming down from the terraces and patiently queuing for their turn.

Home Affairs Minister, Cain Mathema also came to witness the chaos which resulted in his officers being overpowered.

He however refused to give any comment as he moved from the epicentre of chaos to the VIP tent.