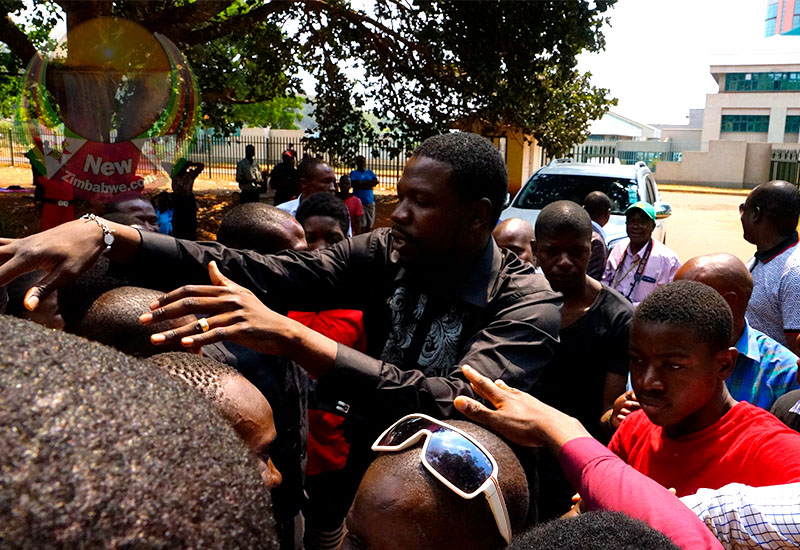 PROPHET Walter Magaya, arrested Thursday and bailed $300 the next day, caused a stir outside the Harare magistrates’ court when dozens of people mobbed him, with some beseeching the under-fire Harare preacher to bless them.

This was after the Prophetic Healing and Deliverance Ministries founder had just been released from the Harare magistrates’ court holding cells soon after paying bail.

Magaya was arrested on Thursday on charges of contravening Section 41 of the Medicines and Allied Substances Control Act and was immediately released in the custody of his lawyer, Everson Chatambudza.

Magaya freed on $300 bail, mobbed by followers outside court

Magaya freed on $300 bail, mobbed by followers outside court

The charges stem from claims he made at his church last Sunday that he had discovered a cure for HIV/Aids.

Authorities and health rights groups were soon to place the charismatic preacher under siege, accusing him of attempts to mislead HIV positive persons who were surviving positively while taking the life prolonging drugs.

At a press briefing with the Ministry of Health on Thursday, Magaya apologised for his “rushed” announcement and pledged to submit the entire process of scientifically testing the medicine to relevant authorities.

Among his bail conditions Friday, Magaya was ordered to surrender title deals to his Waterfalls Hotel and to report once a fortnight at Waterfalls Police Station.

He was remanded to 26 November pending trial.

But his exit from court premises saw a brief drama as people who were waiting outside mobbed him, some shouting “papa, papa” and kneeling before him, pleading to be blessed.

Magaya, who came to court with a handful bodyguards, laid hands on them for a brief period before he was whisked away in a convoy of about five cars.