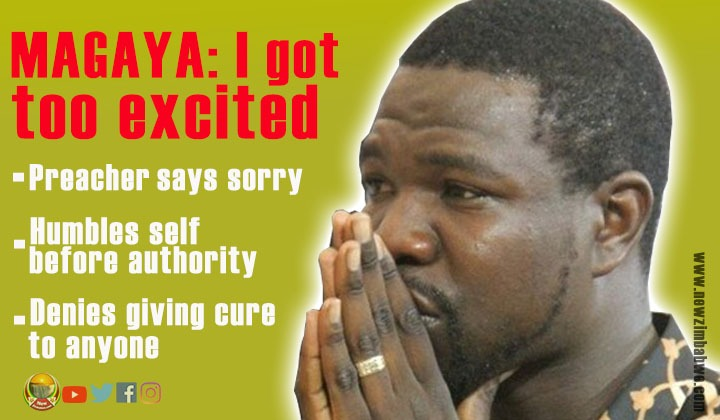 UNDER-FIRE preacher Walter Magaya has issued an apology for “rushed” claims he had discovered a cure for HIV/Aids, telling a joint media briefing with the Health Ministry Thursday that he made the announcement out of “excitement”.

The Prophetic Healing and Deliverance Ministries founder invited strong rebuke from government, the United Nations and local health rights groups when he last Sunday excitedly unveiled his Aguma capsules he said had properties to cure HIV/Aids in just 14 days.

Police swooped on his Harare offices on Wednesday night to recover what he had claimed were stocks of the medicine.

But the charismatic preacher cast a jaded character during a press briefing at the Ministry offices Thursday, saying he has learnt his mistakes and had, accordingly, submitted the process of testing his discovery to the authorities.

Magaya said he got convinced he had found the elusive cure for HIV/Aids when it got tested in India but denied ever testing it on any individual in Zimbabwe.

“At the same time, I carry a very important apology to the ministry, to the public at large and all organisations,” he said.

“…After discovering what I discovered which was tested in India, holding a report which I overwhelmingly went on and announced what I was carrying in my hands without taking note of the authorities of Zimbabwe.

“According to what I have learnt, the authorities of Zimbabwe and all the regulatory authorities were supposed to scrutinise, analyse and be satisfied with what I was holding before I prematurely announced.

“The apology that I carry is an apology of saying we rushed to announce what we were carrying without the authorities analysing it but at the same time, I want to salute the Ministry (Health) which has handled me like a child and showed me the way.”

He said he was now working with the ministry in terms of the country’s medicines control regulations.

Asked why he rushed to make the announcement without the medicine having been tested first, Magaya said he did this out of excitement.

“The reason of the rush was because of excitement of what I was holding, the excitement which overwhelmed me.

“I spoke before I looked into authorities regulations. For me to come and apologise, it is a sign of regret that I rushed the announcement,” Magaya said.

His apology also comes after the Zimbabwe Hospital Doctors Association threatened to slap the controversial miracle healer with a lawsuit if he did not retract his claims.