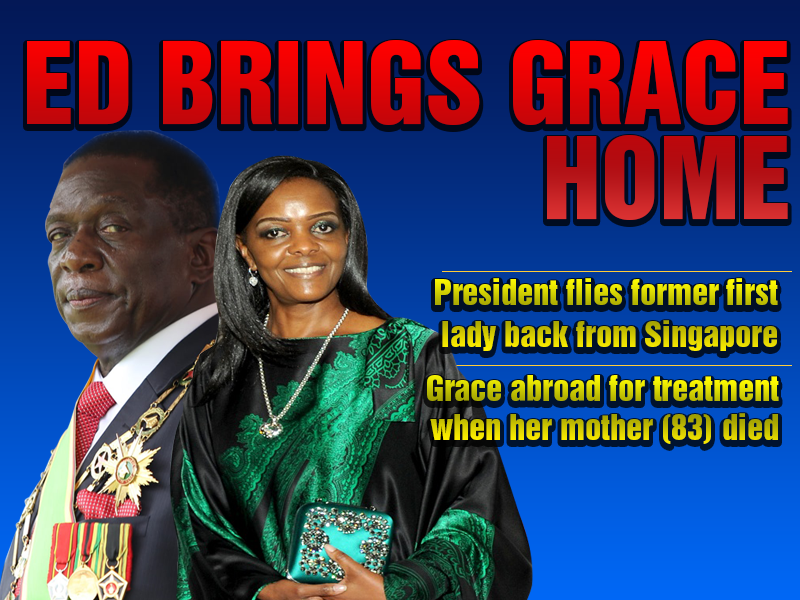 Grace was in the southeast Asian country for treatment over an undisclosed health complaint when her mother, who was 83, died in Harare last Thursday.

“The president decided to spare the former first lady the inconvenience of scheduled flights at this difficult moment so a chattered plane was arranged for so she could return home as quickly as possible,” said a senior Zanu PF official.

Relations between Mnangagwa and the former first family appear to be on the mend after hitting a deadly low as the fight for former president Mugabe’s succession came to head.

After being publicly humiliated at rallies by Grace, Mnangagwa was dramatically fired from government and Zanu PF by Mugabe in November last year.

He escaped to South Africa through Mozambique, claiming assassins were on his trail.

Two weeks later the former vice president returned to take over leadership of the country and party after Mugabe was toppled by a coup.

But the Mugabe’s did not give up, reportedly helping form the opposition National Patriotic Front (NPP) in the lead up to the July 30 elections.

And on the eve of the vote, Mugabe called a press conference where he announced that he would not be voting for Mnangagwa and backed MDC Alliance leader Nelson Chamisa instead.

Even so, after the elections Mnangagwa invited the Mugabes but they could not attend due to poor health with Grace said to be in Singapore for treatment while the former president, now 94, was poorly at home.

Instead, daughter Bona attended the inauguration on behalf of her parents.

And, in a sign relations are continuing to improve between Mugabe and his former protégé Mnangagwa sent a condolence message on the passing of Grace’s mother and then facilitated the daughter’s return home.

“I want to thank President Mnangagwa and his Presidium for facilitating for the travel of former First Lady Dr Mugabe back home for the funeral of Ambuya Marufu,” Mawarire said on Twitter.

“Such a gesture is very much invaluable and much appreciated. May the lord keep you, lift up his countenance upon you and give you peace.”