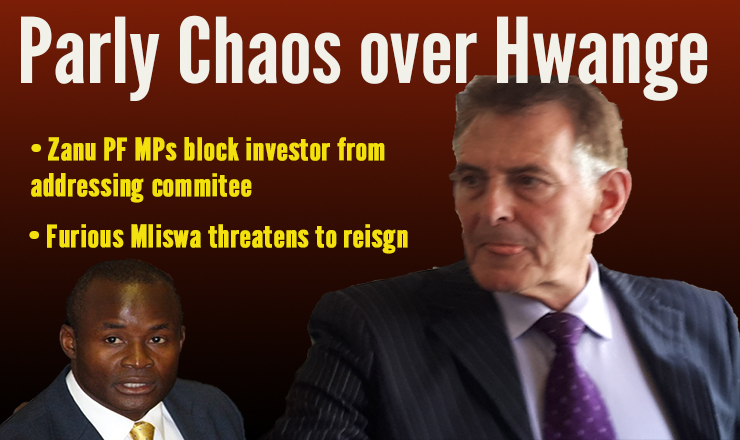 ZANU PF legislators blocked a UK-based Hwange Colliery shareholder from addressing a parliamentary committee Monday in rowdy scenes that were described as “undignified and embarrassing” in front of foreign investors.

Controversial British tycoon Nicholas van Hoogstraten, who has several business in the country and was over the years claimed to have been close to the erstwhile Mugabe regime, was due to address Parliament’s mines committee on Monday.

He travelled to Harare at the invitation of committee chairman Mliswa, the independent MP for Norton.

The London tycoon says he is the second largest shareholder in Hwange after the government.

The troubled coal miner has been placed under a re-construction order by government due to State indebtedness, a process now being probed by the legislative committee.

However, in rowdy scenes, Zanu PF MPs refused to allow van Hoogstraten to appear before the committee because he has a case pending before courts in Harare.

The tycoon claimed the decision by the ruling party legislators was part of a cover-up of rampant corruption which has crippled the company.

“They are trying to cover up the massive corruption that has been going at Hwange over the last three years,” van Hoogstraten told reporters later.

“The fiscus hasn’t got anything from Hwange for nearly 20 years now. At the end of the day it’s the people of Zimbabwe who suffer because the company doesn’t pay taxes.

“Hwange exports an international commodity; so, where is the foreign currency going? I couldn’t give you more details about that because again it’s friends in China; friends in inverted commas by the way; that’s where the money goes.

A frustrated Mliswa said he was considering his position as chairman of the committee and would announce his decision within 48 hours.

“I suspect Zanu PF members of the committee do not want us to do this work properly to expose top officials who might be doing wrong.

“I can do far more as an ordinary member rather than be whipped as a chairman,” he said.