ZIMBABWE Congress of Trade Unions (ZCTU) president, Peter Mutasa and 35 trade unionists have been arrested in Harare and other major centres countrywide as police moved Thursday to enforce their ban on the labour group’s demonstrations against government’s 2 percent tax on electronic transfers and rising poverty.

Mutasa, his secretary general, Japhet Moyo and two others were seized by anti-riot police who had cordoned off ZCTU’s Harare headquarters as trade unionists vowed to defy a ban which they called unconstitutional.

ZCTU information officer, Last Tarabuku told NewZimbabwe.com some 19 union activists were also arrested at around the same time in Mutare and taken to the CID law and order division in the city.

Some 13 others were arrested in Masvingo as police blocked the countrywide protests. 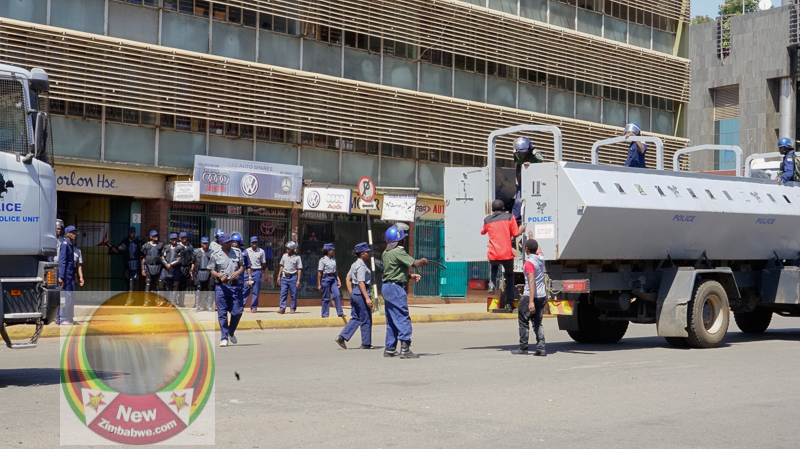 In an earlier interview before his arrest, Mutasa maintained that time was up for citizens to make their voices heard during a period of prices of goods and services spiralling out of control.

“What we want is a decent working environment,” he said.

“Today we are found in the same predicament which our forefathers like (former ZCTU secretary general and prime minister) Morgan Tsvangirai spent much of their lifetime fighting against.

“Brute force continues to be used against innocent citizens who yearn for nothing except a peaceful and prosperous country,” he said.

Mutasa was adamant nothing was going to stop the firebrand labour group from going ahead with the banned demonstration insisting it was time to resist government’s abuse of the country’s tough security laws to withdraw constitutionally guaranteed citizen rights.

A day before, the ZCTU chief sent emissaries to engage and assure police the demonstration was going to be peaceful and should, thus, be allowed to proceed but police stood their ground.

The ZCTU also filed an urgent High Court application Tuesday in efforts to seek the overturn of the ban. The hearing was set for late Thursday morning.

Police banned on the countrywide demonstrations saying this was in line with a blanket ban on public gatherings in parts of the country to avoid the spread of the cholera outbreak that has killed 49 people since September.