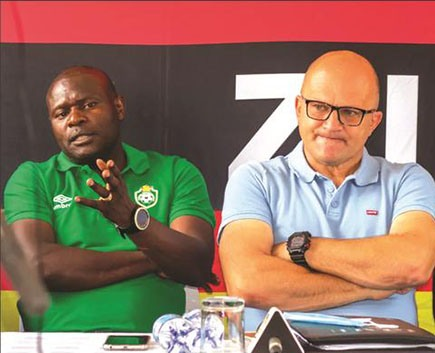 THE new-look Warriors have been dealt a major blow ahead of their participation in the COSAFA Cup after the senior national football team head coach Zdravko Logarusic and his assistant Lloyd Chitembwe were Monday denied entry into South Africa.

The duo was part of the Warriors delegation which left Harare Monday morning ahead of the COSAFA Cup which kicks off Tuesday in Port Elizabeth, South Africa.

Zimbabwe who open their campaign Thursday would be without two of their coaches after it emerged ZIFA did not do their homework prior to the team’s departure.

A source at the local football mother body confirmed to NewZimbabwe.com that the duo of Logarusic and Chitembwe had been barred from entering South Africa by the country’s immigration authorities.

The shocking development has left Dynamos coach Tonderai Ndiraya and ZIFA’s general manager for national teams Wellington Mpandare as the only members of the Warriors technical team who are in South Africa.

“Yes, it’s true that they have been denied entry into South Africa. With the Warriors coach Logarusic, it emerged that he needed additional documentation to get a visa as he is a Croatian national, the ZIFA secretariat is working flat out to ensure that he will be able to gain entry,” said the source.

Zimbabwe, the most successful team in the COSAFA Cup, having won the regional competition six times since it started in 1997, will kick off their campaign against the Mambas of Mozambique in their opening match Thursday ahead of other group matches against Namibia and Senegal.

Veteran midfielder Ovidy Karuru has been entrusted to lead the Warriors at this year’s COSAFA Cup edition.

The 32-year-old, who plays for relegated South African side Black Leopards, was the obvious choice for the captaincy as he is the most experienced player in the Warriors squad.

The attacking midfielder, who made his national team debut 14 years ago, will be hoping for another memorable run in the regional tournament.

Karuru was the leading goal scorer at the 2017 COSAFA tournament held in South Africa’s North-West province when Zimbabwe won their fifth title. He was also part of the team which successfully defended the cup in Polokwane a year later.

This year, Karuru will be leading a new-look squad that is dominated by locally-based fringe players.

Meanwhile, the Warriors technical team was Monday forced to make some late changes after the experienced trio of Evans Rusike, Perfect Chikwende, and Godknows Murwira were withdrawn from the final squad on medical grounds.

An update from ZIFA Sunday said Rusike, who is hunting for a new club after he recently parted ways with South Africa’s SuperSport United had a torn Achilles tendon.