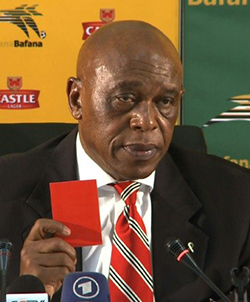 SOUTH African business magnate Tokyo Sexwale, who was a close friend of Nelson Mandela, said on Tuesday he wanted to repair the “severely undermined” FIFA brand as he confirmed he was standing for the presidency of world soccer.
The post-apartheid government minister who spent 13 years with the late president at the Robben Island prison said bribery allegations connected to the 2010 World Cup hosted by South Africa would not affect his candidacy.
Sexwale was a member of the bid team and the organising committee for the 2010 World Cup, the first held in Africa.
Sports Minister Fikile Mbalula confirmed in June the country had given $10 million meant to help pay for the tournament to a football official indicted in the United States, but denied the payment was a bribe, as U.S. prosecutors allege.
The money was approved by the South African government and in agreement with the South African Football Association to support the African diaspora in Caribbean countries as part of the World Cup legacy.
“It doesn’t affect me as a candidate because I was not involved in the money or giving anybody the money,” Sexwale told a news conference confirming he was running in the Feb. 26 vote to replace Sepp Blatter after Monday’s candidacy deadline.
“It’s a question best left to the people who are doing the investigations but it should be done with dignity so that we don’t tarnish the reputation of this country.”
“Beautiful game”