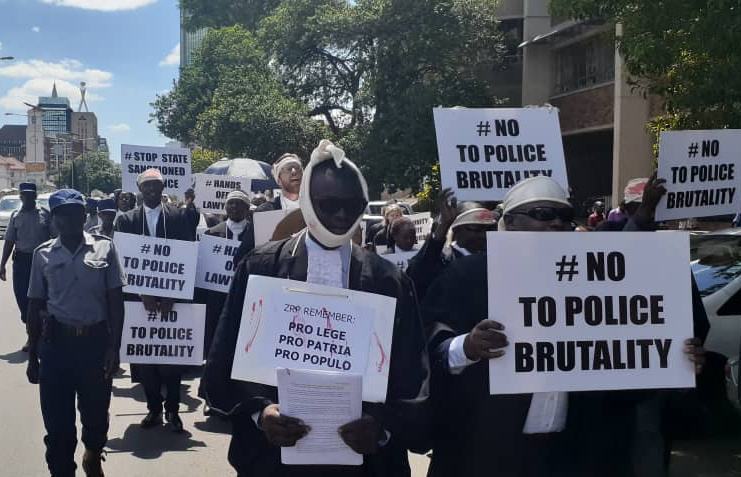 In a statement weekend, LSZ secretary Edward Mapara also noted the rise in attacks on legal practitioners carrying out their duties constitutionally.

He also expressed concern over how journalist Hopewell Chin’ono and Transform Zimbabwe president, Jacob Ngarivhume, who are currently held up in remand prison, are being treated by prison officials after being denied access to warm food from outside prison, and clothing.

The State is also seeking to bar Beatrice Mtetwa from representing Chin’ono, accusing the top lawyer of professional misconduct.

“The Law Society of Zimbabwe notes with grave concern and condemns the deteriorating human rights situation in the country, including the wanton and unmitigated attacks on legal practitioners carrying out their constitutionally protected jobs of representing citizens by the State,” said Mapara in the statement.

“It is unacceptable that remand prisoners such as Hopewell Chin’ono and Jacob Ngarivhume should have to incur legal expenses to enforce respect by the State of simple and obvious rights such as private counsel with their lawyers, access to clothing and food, and not being subjected to inhumane and degrading treatment in prison, amongst other rights clearly spelt out in the Constitution of Zimbabwe.

Mapara condemned the arrest and abduction of suspects’ relatives after the police failed to locate the accused.

“We condemn the arrest of innocent citizens, not wanted for any crime, but simply because they are related to a suspect and are seemingly being used as bait, in gross violation of their right to liberty, such as in the case of Mduduzi Mathuthu’s sister, Nomagugu Mathuthu,” said the group.

Mduduzi is a Zimbabwean journalist based in Bulawayo.

The LSZ also condemned the abduction and torture of citizens across the country by suspected State security agents.

“The case of Mduduzi Mathuthu’s nephew, Tawanda Muchehiwa being a sad example of such after he was abducted and severely tortured and only to be produced at court after the intervention of the High Court following a petition by his diligent lawyer.

“We call upon the State to seriously investigate these cases and bring these perpetrators of human rights abuses to justice.

“We also condemn the illegal and wanton use of unnecessary force by State security services in the enforcement of lockdown regulations, such as in Beitbridge, where police officers set dogs on unarmed and non-violent civilians, causing extensive injuries to some who had to be hospitalised, simply because the citizens failed to get public transport home before 6 pm. Such arbitrariness and use of violence by arms of the State undermines the Constitution and the rule of law,” he added.