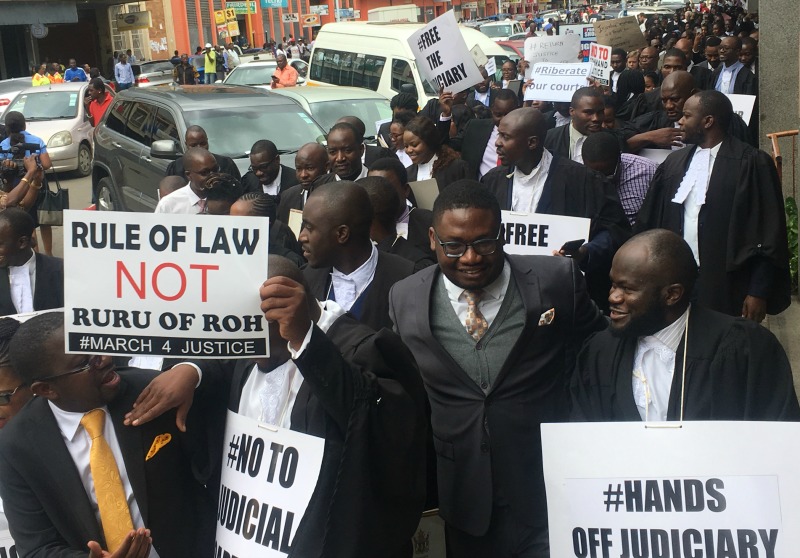 LAWYERS in Harare on Friday marched against police brutality and petitioned the Home Affairs Minister Kazembe Kazembe as well as Police Commissioner General Godwin Matanga over what they found to be a heavy handed approach to issues by authorities.

In an interview with NewZimbabwe.com during the demonstration, Zimbabwe Lawyers for Human Rights (ZLHR) director Rose Hanzi said the police must ensure that anyone exercising their rights, does so unhindered and in a peaceful environment.

“Citizens must actually be secured by police not to become victims of violations perpetrated by the same people who should guarantee their safety,” Hanzi said.

“We are also calling on the relevant authorities, Home Affairs Ministry, Commissioner General of the Police to ensure that when lawyers are carrying out their lawful duties, they are allowed to do so without fear of being attacked by the authorities.

“That they are not denied that right to represent clients of their choice particularly in human right cases.”

Hanzi added: “Zimbabwe has ratified several international human rights instruments other than the Constitution, that clearly state the rights of lawyers, rights of anyone who comes in confrontation with the law, in the custody of the police and other law enforcement agents that they do have a right to receive legal representation and that they should be able to do so in an environment that is safe and secure.”

The lawyers, who numbered up to about 50, marched from the High Court of Zimbabwe to Mukwati Building where their leaders handed a petition to Home Affairs Minister Kazembe demanding that the police operate within the requirements of the Constitution of Zimbabwe “and not to use disproportionate force, torture, cruel and, inhuman and degrading treatment or punishment or conduct arbitrary arrests.”

The petition demanded that government and the police, “launch an immediate inquiry into all assaults of members of the public at the hands of the Zimbabwe Republic Police with the aim of identifying those responsible and holding perpetrators accountable in order to serve justice and to prevent recurrence of  violations.”

“Expedite the establishment of an Independent Complaints Mechanism as provided (for) in Section 210 of the Constitution which will be mandated with receiving and investigating complaints from members of the public about misconduct on the part of members of the security services who include the Police Service and for remedying any harm caused by such misconduct.”

Young Lawyers Association member Douglas Coltart has been attacked twice by police in the last two months while attempting to represent a client.