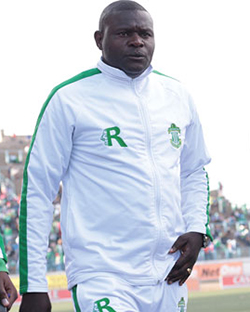 CAPS United hinted at reclaiming old glory days after they emerged as the only victorious capital city club in the opening round of the 2016 Castle Lager Premier Soccer League.
United thumped visiting Chapungu 3-0 at the National Sports Stadium last Sunday, to make a mockery of bitter rivals Dynamos who were trounced 3-0 by Chicken Inn 24 hours earlier in Bulawayo.
Harare City also had a false start to the campaign after falling 1-0 away at Triangle.
Joel Ngodzo, Tafadzwa Rusike and Moses Muchenje were on target for United, whose coach Lloyd Chitembwe was very impressed and quick to declare that the intention is very much to end an 11-year league title drought.
“As far as this result is concerned, we are very happy,” said Chitembwe.
“This has just reminded us of what we are likely to achieve this season and we just need to continue working hard with as much effort as we can,” Chitembwe said.
“We have the quality in the team and you cannot count that out. The players just have to be reminded to grind results week in, week out.
“It is good to start this way and if the players gave what they gave us today, there are very good chances and every reason to believe that they can give more than they gave today.”
United travel to newboys Ngezi Platinum this weekend for a match that will test if Sunday’s result was fluke.
Ngezi started their campaign with a 3-0 mauling of fellow newcomers Mutare City and might want to make a bold statement against Caps.
FIXTURES
Saturday: Dynamos v Triangle, Ngezi Platinum v Caps United, How Mine v ZPC Kariba, Bulawayo City v Tsholotsho, Chapungu United v Hwange
Sunday: Border Strikers v Chicken Inn, Highlanders v FC Platinum