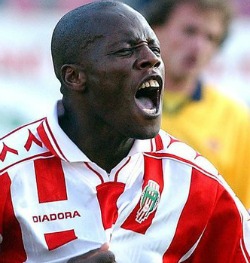 Team Dynamos UK will this weekend hold their second annual football tournament sponsored by Green Shoot Specialised Care Service Limited.
The event is held in collaboration with Team Zimbabwe UK under the banner of the Zimbabwe Diaspora Football Development Strategy.
The tournament will take place in Leeds at the Fearnville Leisure Centre Oakwood Ln, Leeds LS8 3LF on Saturday 24th of June 2017 from 11 am to 6pm.
Dubbed the Champions of Champions Tournament, this year’s event will feature 8 teams from across England most of them composed largely of Zimbabwean players and others from UK academies.
The purpose of the tournament is to identify quality players that will represent Zimbabwe at the UK African Nations Cup Tournament which kicks off during the 1st week of July 2017.
Team Dynamos UK football Academy and Community Charity was founded by Shingirayi Jose-a former banker and administrator and the Chihuri brothers, Kennedy and Louis, both of whom played football in Zimbabwe.
Kennedy, a former Zimbabwe international, and now project director, has vast experience in European football and is using his contacts to support their graduates to secure professional football contracts in the continent.
Shingi said all preparations were in place and they, as tournament organisers, were happy to host all the teams and their fans.
Last year, the event brought Leeds to a standstill as it provided the Zimbabwean community an opportunity to engage socially while watching football and enjoying the tournament hospitality.
According to Shingi, this year’s tournament will be bigger and there will be plenty of kids’ entertainment plus the usual music and BBQ.
He called on the Zimbabwean Community in Leeds and surrounding towns to come and enjoy a football feast with their families.
Tournament sponsors, Green Shoot Specialised Care Services Ltd, said the prize money will be announced at a press conference on Friday.